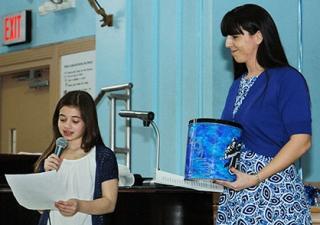 More than 250 students, teachers, parents and a few alumni celebrated the 60th anniversary of PS 186, the Castlewood School in Glen Oaks, on April 4. Students wrote down titles of the best movie, book and song of the year and stored them in a time capsule, along with photos of their school’s Wall of Presidents, playground and gym. The school was called Castlewood, Chapter Leader Denise Verde told the audience, because when it opened in 1954, it looked to neighbors like a castle among the wooded hills surrounding Grand Central Parkway. The school’s first principal made a speech on its opening day about how the school would represent the embodiment of its students’ and faculty’s faith in democracy and democracy’s future. The same holds true today, Verde told the audience. Cluster teacher Tamara Restrepo and art teacher Liz Cageao helped students with the time capsule, while a family with ties to the school donated the anniversary banner, which is now on display above the school’s entrance. below: Verde holds the time capsule that students at the school put together while a 5th-grader describes its contents.