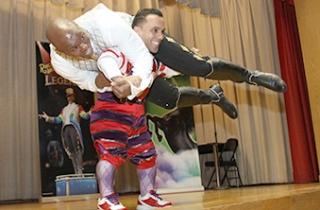 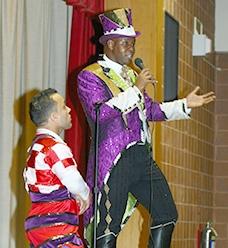 After the Ringling Bros. and Barnum & Bailey 4-foot-10-inch acrobat tossed the 6-foot-5-inch circus ringmaster over his shoulder and spun him around on the auditorium stage of PS 24 in Sunset Park on Feb.25, students learned an anti-bullying lesson like none they had ever heard before.

Out of their seats with excitement over the unexpected feat of strength, the children became very quiet as the two circus performers then told stories of being bullied for years in school, of being the perfect target for bullies because of their size.

Resplendent in glitter and purple satin, the towering ringmaster, Jonathan Lee Iverson, and the cartwheeling, tumbling acrobat, Paolo dos Santos, told students that the only way to deal with bullies is to defy them.

Brazilian-born dos Santos described the “fearful bullied kid” he had been who kept trying until he won an important acrobatic competition at age 11 and became a national champion. And it was hard for students to imagine that the charismatic ringmaster was once a clumsy, awkward adolescent and the target of bullies.

“You are not what the bullies say you are,” Iverson counseled them. “The bullies of our day would never have guessed we would become stars and travel the world.”

He encouraged the children to be “courageous enough to be yourself.”

The anti-bullying message was highlighted in schools citywide during the celebration of Respect for All Week in mid-February. Fifth-grade teacher Arceliz Gonzalez said the Brooklyn school had a strong anti-bullying program with scores of children trained as mediators.