Around the UFT
Spring Education Conference

UFT President Michael Mulgrew lauded members for their courage and strength throughout the pandemic and spoke about the challenges ahead at the UFT’s annual Spring Education Conference on May 15.

“The state of the union is this: We are battle-tested like we’ve never been before,” he said in a 20-minute address. “Hopefully, this is the end of the pandemic, and I can say that the union might be a little bruised, but it has a plan and is stronger than it has ever been.”

Mulgrew said new federal funds for education and the turnover in New York City leadership in November have combined to present an unprecedented opportunity to tackle the challenges long facing the city’s public schools.

“We have to fight on the political side but we also have to fight for the policies that we know work,” he said. “We have the opportunity to use the funding we have now to really change our school system the way we have all dreamed about.”

The conference was streamed live to more than 3,000 registrants, with a small socially distanced audience in person. Mulgrew kicked off the event with a morning town hall discussion with Scott Stringer, the union’s endorsed candidate for mayor, and two UFT members who had participated on the candidate screening committee. State Attorney General Letitia James accepted the union’s John Dewey Award for Excellence in Education. In the afternoon, members attended one of two free virtual workshops that granted CTLE hours.

Mulgrew used his address to remind UFT members of the challenges they have faced — and surmounted — since March 2020. He spoke of the instrumental role that educators played in pushing the mayor to shutter school buildings at the onset of the pandemic and then keeping education moving forward when schools went fully remote.

“We went from that sigh of relief that schools had closed to how do we make this work, how do we figure this out? There was no plan, there was no support,” he recalled.

Mulgrew praised UFT members for keeping their focus on their students despite everything else they were dealing with.

“Nothing about what we have gone through is fair, but we understood at all times that our responsibility was to the children that we had dedicated our lives to,” he said.

Conference participants had a choice of two afternoon workshops: “From Trauma Awareness to Healing-Centered Classrooms,” guided by a facilitator from the UFT’s Positive Learning Collaborative and “Permission to Feel: Strategies for Healthy Emotion Regulation During Uncertain Times” led by Marc Bracket, the director of the Yale Center for Emotional Intelligence.

Nekia Williams, a teacher at PS 41 in the Bronx, said the two-hour “Permission to Feel” workshop gave her valuable social-emotional strategies for next school year. “Especially in the transition back inside of the classroom with all of my students, I’ll have a better perspective on how to support them,” she said.

Mara Cohen, the UFT chapter leader and a science teacher at the All City Leadership Secondary School in Brooklyn, said the workshop will help her “be more understanding and listen more instead of just responding.” 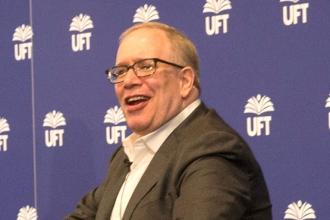 The UFT’s endorsed candidate for New York City mayor, Scott Stringer, spoke about his plans to reallocate money to the school system during the union’s annual Spring Education Conference on May 15. 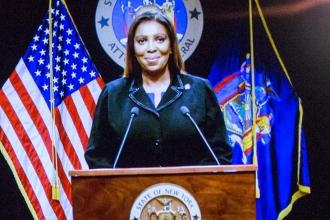 New York State Attorney General Lititia James was honored at the UFT's Spring Education Conference on May 15 with the John Dewey Award for Excellence in Education, the highest honor the UFT bestows.