And the winners are ...
New York Teacher
Image

All of the honorees get together for a group shot. 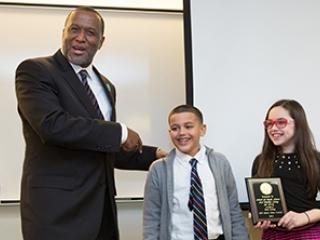 Erica Berger
DeVeaux with PS 971’s best actor and actress awardees.
Call them the Oscarettes! Students and their teachers gathered at UFT headquarters on April 17 for the BRAVE Video Awards ceremony, with screenings, pizza, popcorn and plaques. Together they had written, acted in and produced original videos against bullying and discrimination as part of the Be BRAVE Against Bullying campaign. Adhim DeVeaux, the coordinator of the BRAVE program, said that the idea for the contest came from contest coordinator Darlene Post and the campaign’s effort to raise awareness in schools and get students involved. “Mr. A” and “Math Man,” in real life brothers Hussein and Yusef Abdullah who teach at PS 971 in Brooklyn, helped their students create “Through the Eyes of the Bullied.” Student actors portrayed kids who were both bullied and bullying, showing that the two states of mind are connected by feelings of isolation and abandonment. The video won for best acting, with a large contingent on hand to accept the award. The award for most creative video went to PS 12, the Lewis and Clark School, in the Bronx, where speech teacher Marissa Sheehan wrote and performed a song for her nonverbal students called “All About That PECS.” PECS is the Picture Exchange Communication System her students use, and in the video they tapped their devices as they danced to the song. The “Bully-Busting Song” won an award for PS 264 in Brooklyn. Best editing went to the University Neighborhood HS in Manhattan. Best overall video was awarded to the Brooklyn Arts & Science Elementary School, where students spoke on camera about their school’s “Guiding Principles of Peace and Unity.” The winning videos can be viewed on the BRAVE Facebook page.
Related Topics: BRAVE