All aboard for learning
New York Teacher
Print 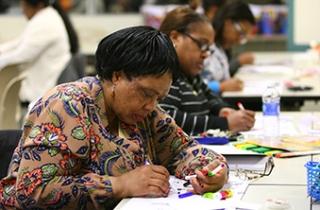 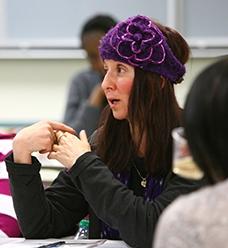 Around 25 UFT family child care providers gathered on March 26 for a professional development workshop hosted by WNET and the network’s famous Thomas the Tank Engine, the star of its classic animated children’s show “Thomas and Friends.” The workshop at union headquarters focused on strengthening participants’ ability to foster the social and emotional development and social skills of their young charges through the use of games and short clips from the television program. Ideally, said Tammie Miller, the chair of the union’s Family Child Care Providers Chapter, the exercises will help youngsters learn to manage their frustrations and self-soothe, skills she described as the “educational building blocks” that they will need in order to succeed in a classroom setting. “It’s exactly what’s needed not just in a family-based setting but what children will need when they’re going to school so that the teacher can teach and children can learn,” Miller said. As part of the workshop, the providers watched several episodes of the award-winning show, including one called “Calm Down Caitlin,” in which the childlike train Caitlin must learn to “blow off some steam” despite her excitement in a new environment, and discussed ways to incorporate the episodes’ lessons into their teaching. They also learned activities such as crafting a train, in which children work together to build a Thomas replica using paper cutouts with the different parts of a train on them. Participants were also introduced to other WNET educational programs such as “Cyberchase,” which teaches math skills, and “Annie,” based on the musical of the same name. “It was a great class,” Miller said.