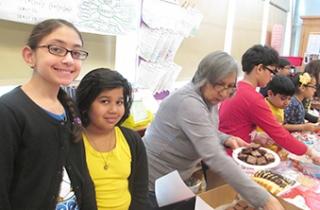 When the teachers, staff and parents of PS 69 in Jackson Heights learned about the typhoon in the Philippines in November, they sprung into action. In December, the school raised $3,742 in a single day from bake sales, a Dress Down Day fundraiser and a coin collection. The PS 69 Parents Association kicked in another $1,000 from its Movie Night fundraiser. The total donated to the UFT Disaster Relief Fund: $4,742. That money was sent to the Philippines via the American Federation of Teachers.

“It was truly a community effort, one undertaken solely to help others in need,” said a joint letter from the PA president, the principal and the chapter leader to the teachers and staff.

Such impressive fundraising by the entire school community is par for the course for PS 69, which gives its students a wider view of the world by focusing on the values of the three C’s — compassion, community and citizenship.

The school previously raised $5,000 for victims of the tsunami in Japan in 2011 and when Hurricane Sandy struck New York City in 2012, the school community raised $6,000 for a devastated school in Broad Channel with which PS 69 had created a partnership, said Cregan.

Each Christmas, the PS 69 teachers, parents and students also make sure that 75 homeless children receive age- and gender-appropriate presents and toys.

Cregan said the hard work that fundraising involves, especially for teachers, is worth the effort.

“The children love the idea they are helping, and we really stress the important lesson of helping each other,” she said.