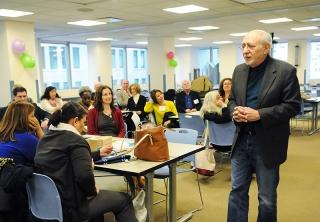 Folk singer Peter Yarrow of Peter, Paul and Mary fame was awarded the Hubert H. Humphrey Humanitarian Award during the 54th annual Greater Metropolitan New York Social Studies Conference luncheon at UFT headquarters in Manhattan on Feb. 1. Social studies teachers who attended the conference, titled On the Wings of Workers: A Celebration of the Global History of Labor, were offered workshops in labor history and ways to bring that history into the classroom, including the Triangle Shirtwaist Factory fire, workplace safety and globalization; teaching labor through the movies;

teaching the coal strike of 1902; and the Common Core and global history. Teachers who participated received up to eight hours of professional development credit. George Altomare, the director of UFT professional committees, presented the Humphrey Award to Yarrow, noting his long involvement in social justice. Yarrow performed at the 1963 March on Washington for civil rights, at anti-war demonstrations and during the Occupy Wall Street movement. Altomare, one of the founders of the UFT who has also used song to rally labor, joined Yarrow in a singalong of folk classics, including “This Land Is Your Land.” Yarrow paid tribute to the late Pete Seeger, his longtime friend and mentor who died on Jan. 27. After receiving the award, Yarrow also led a workshop on how to combat bullying. Yarrow founded Operation Respect, an anti-bullying program, in 2000.
Related Topics: Social Studies
Close