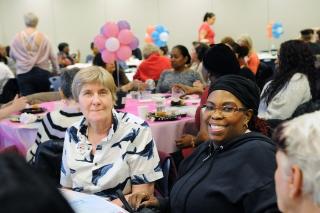 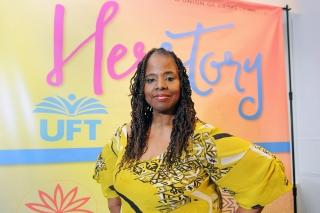 Carmen Alvarez and Ellen Gallin-Procida believe a woman’s place is in her union.

Alvarez, the UFT’s first vice president for special education, and Gallin-Procida, the former director of the union’s Grievance Department, both recently retired, were honored at the union’s HERstory brunch on March 31 at UFT headquarters in Manhattan.

The celebration of Women’s History Month drew 200 participants and included a special tribute to Ray Frankel, a founding UFT member and a former high school teacher who served the union until she died in February at age 98. Frankel was “a groundbreaker, who laid the foundation for the work we do,” said Janella Hinds, the UFT’s vice president for academic high schools, who planned the event with Karen Alford, the vice president for elementary schools.

Frankel, the daughter of International Ladies’ Garment Workers’ Union activists and a dedicated union organizer, worked at UFT headquarters several days a week and had a role in every UFT election until her passing, but she “never, ever wanted to be in the limelight,” Hinds said.

The HERstory brunch also celebrated the 50th anniversary of the Paraprofessionals Chapter, and it featured students from Queens Vocational and Technical HS pampering members with massages, manicures and makeup applications.

“As a union with a majority of women members,’’ Hinds said, “ we have to take the time to celebrate ourselves and take care of ourselves.”

Members said they attended the event to network and to be inspired by women forerunners in the UFT. They also took the opportunity to share their own stories.

For Sophia Suarez, a biology teacher at DeWitt Clinton HS in the Bronx, having a family of teachers is part of her story, and some of them joined her at the event. Suarez says the battle for gender equality is like “fighting upstream” and she especially supports women who have broken boundaries by pursuing STEM careers.

“It was our honor,” said Hinds, “to celebrate the stories of the women who have made this union what it is today.”