‘It’s not fun getting picked on’
New York Teacher
Print 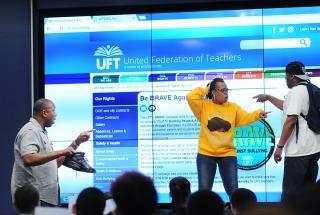 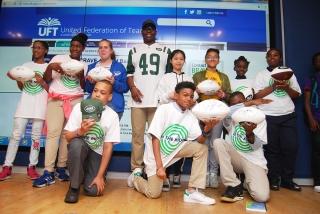 “Be the change you wish to see in the world.” Anthony Harmon, the UFT director of parent and community outreach, reminded about 300 middle schoolers and their teachers and counselors of that famous quote by Mahatma Gandhi as they prepared to head to workshops during the UFT’s anti-bullying conference, “In the Middle,” on May 10 at UFT headquarters. Indeed, Gandhi’s message encompassed much of what the conference, part of the union’s BRAVE anti-bullying program, was about. “This reinforces much of what we do at school,” said Shimona Shriki, a school counselor at JHS 157 in Rego Park, Queens. “Every grade in our school has a weekly character development assembly, but hearing the same message outside the building shows that it’s not just something for school but for everywhere.” Members of the Junior Ambassador Club at the Petrides School on Staten Island attended the conference “to interact with students from other schools and to feel empowered to build student voice on the subject,” said Gary Giordano, a 7th-grade social studies teacher. “They learned that it’s not always obvious when bullying, like cyberbullying, is taking place.” Giordano noted that his students learned of the UFT BRAVE hotline, which they can use themselves or advise a friend to call if they are being bullied. In his welcoming address, UFT Vice President for Middle Schools Richard Mantell told the students: “We want you to be anti-bullying ambassadors. Take what you learn today back to your school and share the information with other kids.” Teachers received a toolkit with anti-bullying lesson plans from STOMP Out Bullying/the New York Jets, which joined the UFT in sponsoring the conference along with the NYPD School Safety Division, the Department of Education and the Municipal Credit Union. Retired Jets fullback Tony Richardson also spoke to the students and distributed signed caps and footballs. “It’s not fun to get picked on,” said Richardson, who said he was bullied as a child because, with a dad in the military, he often found himself “the new kid” in class after the family changed locations. “If you see someone getting picked on, reach out to that person or tell a teacher or a safety officer,” he advised.