To infinity and beyond
New York Teacher
Print 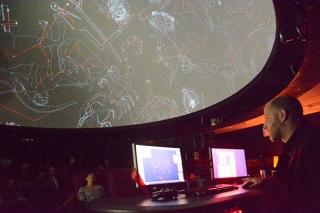 The stars are out — and the planets, constellations and galaxies, too — at the newly renovated Hubble Planetarium at Edward R. Murrow HS in Brooklyn. The planetarium officially reopened on April 2. It has new seating, carpeting, LED lighting and a dome, but what’s most remarkable is its state-of-the-art software, designed by Dr. Carter Emmart, the director of astrovisualization at the American Museum of Natural History. The technology sharing came about when planetarium director Marc Horowitz, the head of the school’s astronomy program, was teaching part-time at the museum and met Emmart. The Uniview software allows the student to move through three-dimensional space according to the laws of physics. It is the only software that allows all users to connect through the Internet and control each other’s planetariums, allowing for simulcasts, explained Horowitz. He hopes that students will learn to design presentations, which can be viewed at Murrow or even the Hayden Planetarium. “We left Earth and went out past the Milky Way, 13 billion light years away, where we saw our galaxy and more than 100 billion other galaxies — and everything was correct for distance, time and space,” said Chapter Leader James Duncan, who was among those attending the opening. “The technology is phenomenal,” he said. “You’re seeing the future.” Former council member Domenic Recchia Jr. helped bring in $600,000 in funding for the renovation. The planetarium, one of only three in the city’s schools, is used by Murrow’s junior and senior students who are taking the astronomy elective. Starting next September, it will also be made available for class trips by public schools throughout the city. left: Horowitz operates the control panels at the planetarium’s opening.