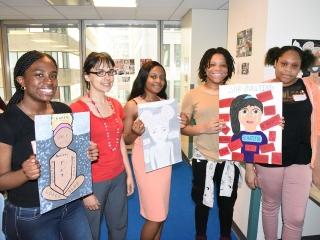 The January suicide of a 13-year-old student who had been bullied at his Catholic school in Brooklyn prompted the New York City Art Teachers Association/UFT to organize an anti-bullying art contest to raise awareness about the issue. “There’s so much bullying that goes on in schools that parents and schools are not always aware of. If we can save even one student’s life” by raising awareness, it’s worth it, said August Martin HS art teacher and NYCATA board member Androneth Sieunarine, who came up with the idea of a contest. Art teachers at 13 participating schools chose the most expressive artwork, ranging from the simple to the complex and from the personal to the political, for the exhibit at union headquarters on May 19. The young artists, in grades 2–12, participated in a recognition ceremony and received gifts of art supplies. Peter Yarrow, of the 1960s folk group Peter, Paul and Mary and the director of the anti-bullying organization “Operation Respect,” sent a video greeting, telling students, “It makes me so proud that you are working to make the world a better place through your art.” Daidra, a student at STAR Early College HS at Erasmus in Brooklyn, said her artwork of a Mexican immigrant was a post-election response. “People from Mexico and other countries feel unwanted,” she said. Her teacher, Judith Nersesian, said students were enthusiastic about the project, which “released a lot of stress” about the presidential election. Teacher Laura Ricca, from Manhattan’s HS for Excellence and Innovation, said the exhibit was a success: “When you connect an art project to something people care about, it becomes deeper.”