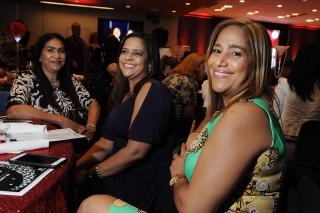 They were gathered on May 11 at UFT headquarters in Manhattan for the union’s sixth annual Provider Appreciation Awards Ceremony that brought together 25 honorees and their colleagues and families a day after the national day to recognize their commitment and dedication to young learners.

“Teaching young children involves an intriguing study of child development, building connections and learning about family involvement while allowing me to form partnerships with a wide range of families with varying beliefs and values,” said Shaundell Agrippa, who received the Juanita Diggs Educator of Excellence Award for her work as director of Nicky’s Little Sprouts, D.C., Inc., in Queens.

Miller said it is fitting that “the union takes the time to say ‘thank you’ and ‘you make a difference’” to providers because their “hard work to educate and help some of the most vulnerable families in the city” reflects the mission of the labor movement.

New York City family child care providers joined the UFT in 2007, following the blueprint of chapters like the paraprofessionals and utilizing the guidance of UFT leadership to organize.

Congressman Adriano Espaillat, whose mother was a child care provider, was the keynote speaker and received an award for his continued support of the chapter. In remarks, he lauded the union-provided benefits now available to child care providers who have joined the UFT.

Corrine Grays, a provider at Little Red Boots in Brooklyn, was glad to be part of the event for the first time. “Every aspect was executed well,” she said.

“To be recognized and celebrated in such an elegant way is a great honor, and it’s something we as child care providers very rarely do,” said Brooklyn provider Melissa Reed, the vice chapter chair. “That’s why the Provider Appreciation Awards Ceremony is so important.”