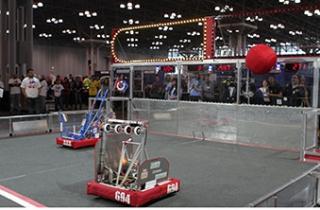 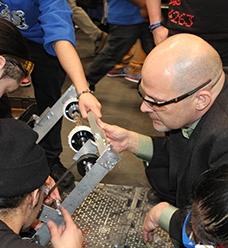 A robotics team from Brooklyn Technical HS will be in St. Louis, Mo., April 23–26 vying for the international robotics championship title. The 17-member city team earned the Regional Winner #1 title in the 66-school FIRST regional competition held at the Javits Center on April 5 and 6. Of the 66 schools entered, 46 were from New York City, while the others were from around the country and from Canada, the United Kingdom, Mexico and Brazil. Brooklyn Tech was part of a winning three-team alliance with a school from Ontario, Canada, and one from London, England, that outscored competitors in this year’s challenge, Aerial Assist, with three robots that moved exercise-size balls down a playing field and over a five-foot trestle to score as many goals as possible during a 2-minute, 30-second match. According to FIRST, which stands for For Inspiration and Recognition of Science and Technology, the purpose of forming teams into alliances is to foster cooperation and teamwork as part of the overall competition. The Brooklyn Tech team’s mentor and coach is mechanical engineering teacher Tom Curanovic. UFT President Michael Mulgrew was among the many who took in the event.