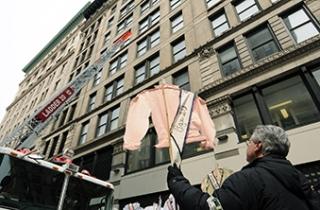 The annual commemoration of the 1911 Triangle Shirtwaist Factory fire on March 25 drew elected officials, firefighters, union leaders, teachers and students to honor the dead and pay tribute to the labor union movement that emerged from the ashes. As in years past, shirtwaist banners with the names of the 146 garment workers who died — mostly young Jewish and Italian immigrant women — were held aloft in front of the building in Greenwich Village, now part of the NYU campus, where the tragedy occurred. The factory owners had locked the workers inside to prevent theft, and the workers either plunged to their deaths from the window or died trapped in the burning workroom. “We’re here to make sure their legacy is remembered,” said Karen Alford, the UFT vice president for elementary schools, in her remarks to the crowd of about 300. “It’s so important to make sure we know our history and to make sure it doesn’t happen again.” Many speakers mentioned similar tragedies that have occurred in recent years in factories in Bangladesh and Pakistan. “It’s a struggle that continues to this day,” said City Council Speaker Melissa Mark-Viverito. Calling it “the fire that changed America,” City Comptroller Scott Stringer said, “It solidified the role of unions in the struggle for fair wages and workplace safety.” Students from PS 363, the Neighborhood School in the East Village, opened the ceremony with a musical tribute. “We’re in the process of studying the Industrial Revolution, and we’re focusing on the causes and effects of the fire and the laws and union activism that came out of it,” said teacher Christie Barron. “We’re looking at fairness, equality and power.” Her students, many wearing red plastic fire helmets, were eager to share their thoughts. “We’re honoring the people who died in the fire,” said Sammy, age 10. “A couple of days before the fire they marched for better conditions, and then this happened.” His classmate Clara added, “They worked hard and made $2 a week.” Many of the students lined up to read out the names of the dead from the Triangle fire, or simply said “a Pakistani worker,” or “a Bangladeshi worker,” as a fire official rang a bell for each name. And a fire engine extended a ladder that did not quite reach the top floors of the building, a reminder of the lives that were just out of reach in 1911. top right:  left: above: