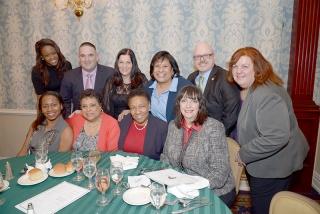 More than 270 friends and members of the UFT’s African Heritage Committee kicked off Black History Month with a bang at the committee’s 11th annual dinner dance and awards ceremony on Feb. 7 at a catering hall in Queens. The night’s theme was “Steady the Course,” which committee chair Anthony Harmon, who is also the union’s director of parent and community outreach, said was a reminder that we must keep up the fight for economic and civil rights. “Just because we have an African-American president doesn’t mean the struggle is over,” Harmon said. Awards were given to two outstanding fighters in that struggle for social and economic justice and civil rights. The UFT’s own Anne Goldman received