Around the UFT
The importance of ‘truth, justice and love’ 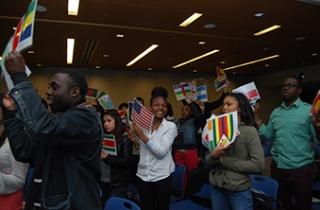 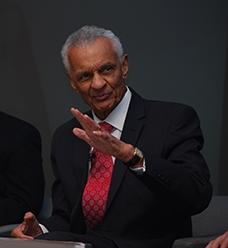 Raised flags representing all the countries of the world and a wish for universal peace capped a UFT program honoring the lives and continuing work of Mahatma Gandhi, Martin Luther King Jr. and the Dalai Lama at union headquarters on April 1. The 17th annual event — A Season for Nonviolence — was a collaborative effort of the union and the Season for Nonviolence Task Force. Keynote speaker the Rev. Dr. C.T. Vivian, a spiritual leader and strategist for the civil rights movement, spoke about the importance of “truth, justice and love” as the essence of what it means to be human. “We can’t be a decent society as long as we hate people,” he said. Presented with the Medal of Freedom, the nation’s highest civilian honor, by President Obama last November, Vivian held the attention of students and community leaders in the audience as he recounted stories of his years as a civil rights activist. Brooklyn HS of the Arts global history teacher Tim Evans, who was there with his 10th-graders, said, “The program did a great job of allowing students to meet and speak to a hero of the civil rights movement as well as providing them with space and time to more deeply think about what a life of peace really means. I want nonviolence to be a value which guides my students’ behavior in both how they treat themselves and others.” In his opening remarks, David Kazansky, the director of the UFT Safety and Health Department, cited the union’s continuing commitment to both nonviolence and equality by linking its anti-bullying campaign to nonviolence in schools and its participation in the civil rights movement since the beginning. A group of students from Curtis HS moved the audience with stories about bullying.