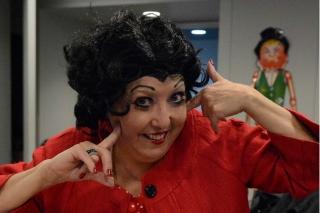 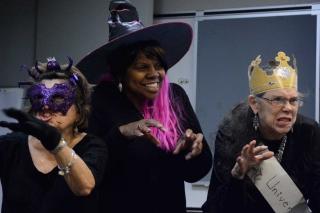 “Does anyone want to dress up as Donald Trump?” asked Elizabeth Rosen, the co-director of the UFT Players, as she circled the room with handheld masks of the presidential candidate. “Now, that’s scary,” said Betty Boop, aka Lourdes Ayala, a retired ESL teacher and one of the Players. Members and guests gathered at union headquarters in Manhattan on Oct. 28 for the group’s 13th annual Halloween Happening, two hours of improvisation, poetry and camaraderie. “We’re like a community,” said Milton Polsky, also a co-director of the group, which will celebrate its 20th anniversary year beginning in January. “We work together, we play together.” Composed of retired UFT members, the Players have about 10 special activities a year, including original productions. “We’re a family,” Rosen said. Polsky welcomed “all ghosts … I mean guests” and encouraged everyone to partake of “sand-witches” before the fun began. To warm up, there was a Halloween dance to music that sounded eerily like the hokey-pokey. Then the actors lined up and created frightening tales using words suggested by guests — like bat, castle and fear — with each participant building on the storyline made up by the previous storytellers. All the and riddles: Why did Dracula stop drinking his mother’s milk? Because he was Hallo-weaned!