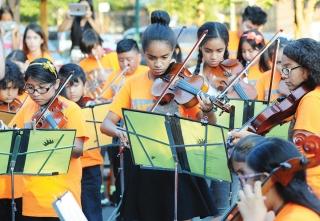 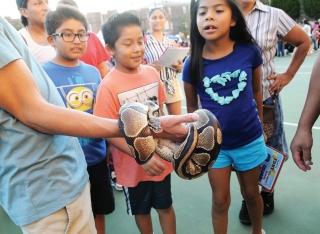 Open School Night on Sept. 17 took place both inside and outside PS 19 in Corona, Queens. Inside, parents met with teachers; outdoors in the yard, there were raffles, dance exhibitions and information booths — the school’s first-ever Community Learning School fair.

The event was the brainchild of UFT resource coordinator Savanity Davis. “I was trying to figure out how I could make a footprint at the beginning of the year and prove to the staff that it’s worth being a community learning school,” she said.

PS 19, one of the largest elementary schools in the city, is one of 25 schools in the UFT New York City Community Learning Schools Initiative, which provides academic supports and social services to students and their families.

Using a white bullhorn, Davis presented student dancers and musicians from a stage in one corner of the yard. Along the fences were booths where the Food Bank for New York City, Queens Legal Services, the city Fire Department, school safety officers, eyeglass and health providers and others answered parents’ questions.

The UFT’s new bus was parked along one wall, and President Michael Mulgrew, alongside District 24 Representative John Harrington, was handing 500 free books to children.

More than half of the students at PS 19 are English language learners. Parent coordinator Josett Pacheco, who helped organize the fair, said parents are highly receptive to being involved in the school and need many types of assistance. PTA member Ramón Cajamarca, who was busy managing a raffle, said he was participating in the fair to help his three children. “But it helps me a lot, too, to know how the school works inside,” he said. “I was not a student in the U.S.”

He was especially proud that parents and staff, including Chapter Leader Richard Burken, had teamed up to win a commitment from the Department of Education to remove six long-standing trailers from the yard.

Teachers circulated through the crowd. Michelle Drametenos, the school’s librarian, said the fair means “everyone gets a real taste” of the community schools idea in action.

Kristen Morris, the literacy coach, said the approach gives stability to the students. “They need that feeling they are going to be taken care of,” she said. “It’s kind of like creating a home.”