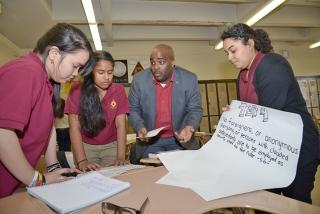 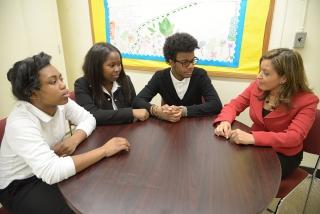 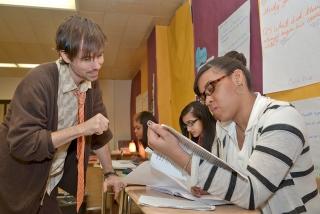 In Edwin Berroa’s 9th-grade social studies class, students are studying a fourth-century B.C. political guide that gives safety tips to rulers. One tip wisely forbids actors from using real weapons in their performances. Another tells how to ascertain the safety of food and drink by observing the colors imparted by poisons and by using tasters.

“What is its connection with how we live in the modern world today?” asks Berroa.

Schuylerville Preparatory HS, a brand-new, unscreened school in the Westchester Square area of the Bronx, offers its predominantly Hispanic students a classical education that the school’s educators hope will hone critical thinking and cultivate students who are able to develop facts into arguments and convey those arguments persuasively and clearly.

The classical model for education “is one that has worked well for a couple of thousand years, and I’m confident it will here, too,” said Chapter Leader Sam Noel, who was part of the core of teachers who worked together at the HS for Law, Government and Justice in the Bronx before founding this new school.

Schuylerville has 100 9th-graders this year and will add about that same number each year until it has four grades. Sixteen students this year are English language learners, 18 have IEPs and all are eligible for free lunch.

Diane Donato, a special education teacher and the dean of academics, says that three of the school’s educators went to Catholic schools growing up. “We learned Latin, and you understand the English language because you know how it works,” she said. “Here, we see a lot of smart kids whose language, reading comprehension and writing skills are not on the level. We’re trying to fill in these gaps.”

The school is grounded in the classical concept of the Trivium, which (if you know your Latin) includes three parts: foundations (grammar, vocabulary and basic skills); logic and debate; and rhetoric.

Over the course of four years, the students will study two years of Latin and four years of math and science, be taught speaking and debate in structured student-led Socratic seminars, and take an advisory in which teacher-mentors will help students connect their goals with the real-world steps they need to take in order to achieve them.

The incoming freshmen in Berroa’s class are serious and focused during the class discussion. “Mr. Berroa, he is awesome,” said Steven. “He puts things together in a modern way so that even if it’s hard to understand, we work it through piece by piece and it gets easy.”

In Ryan McCarty’s Literacy through Latin class, students are marshaling their arguments about how safe recreational marijuana is, based on information gleaned from an in-depth article in Scientific American. Following the class discussion, they will write essays using logic and expository sentences — the logic and debate pillar of their education.

“It’s all about the hook, getting students interested in a topic so you can turn bad discourse into actual knowledge,” McCarty said, describing his teaching philosophy.

In the Literacy through Latin class, Schuylerville students will also be studying the Latin roots of words, which could prove useful in decoding vocabulary words on the SATs and throughout their lives.

Principal Roberto Ossorio, who taught for 18 years before working with other educators to found Schuylerville and becoming its principal, said he and the teachers are trying to develop a collaborative culture. “That word gets tossed around a lot, but we want to get to its true meaning,” he said.

Ossorio says he encourages teachers to take academic risks with the support of ongoing professional development and feedback. “My job is to provide teachers with the resources they need,” he said.

Berroa, who previously taught at a charter school in the Bronx, said he came to Schuylerville because he wanted more professional development, more connection among the staff and more appreciation for his work.

When it comes to learning Latin, Berroa has found that some students are resistant at first. “But then they get that aha moment and you see a lightbulb pop in their eyes. They get it,” he said.

On one recent day, three students visited guidance counselor Ingrid Paulino in her office during their lunch period to discuss the school’s upcoming trip to Harvard University, just one of the many colleges they will visit during their years at Schuylerville.

“Students come here and tell me the school’s like a second home,” Paulino said. “I love it here for that same reason.”

UFT Bronx HS Representative Eliu Lara says Schuylerville is trying something unique. “It offers not only a classical education, but also a caring community where teachers and students know each other well,” he said.