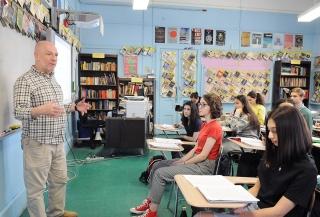 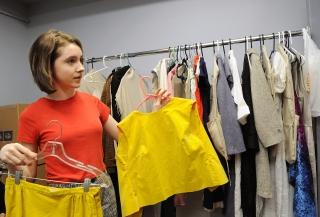 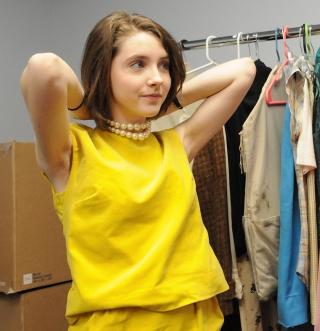 The AP English students quietly and intensely focus on polishing their essays about the 19th-century English writer and critic Walter Pater.

Four of them are just hours away from appearing in the opening performance of the annual big production musical at the Professional Performing Arts School in Manhattan, but they betray no signs of being actors under stress — just motivated students hard at work.

“It takes a certain type of personality to want to get up on a stage in front of an audience — effusive, energetic, there’s a lot of ‘Look at me,’” says Greg Parente, a drama teacher at the school on 48th Street, in the heart of the theater district.

The teachers and the school — created in 1990 to serve students who want to pursue professional work in the arts while attending classes and those who want to study the arts as an avocation — have succeeded in striking a balance between the challenge of high academic standards and success in the performing arts.

School counselor Caitlin Kelly describes the school’s 500 6th- to 12th-grade students as “high functioning kids with a lot on their plates.”

“I don’t know how they do it,” Kelly says, referring to the 10 extra classes students must attend every week beyond their academic requirements. That’s the incredible balancing act.

High school students and the small middle school population of 100 students study drama, vocal music or dance in addition to taking a full academic load. Academic classes from 8:15 a.m. to 1:15 p.m. are followed by two hours of their performance major, which is determined by the end of middle school.

The performing arts instruction is delivered at professional studios: Dancers travel to the Ailey School, Ballet Tech or the School of American Ballet, musical theater majors go to Rosie’s Theater Kids and drama students receive acting instruction from Waterwell, a professional theater company. Other students study at one of Julliard’s Pre-Collegiate programs.

Accommodations are made for those students who are working in film, television or theater productions on and off Broadway to ensure they stay up-to-date on academic requirements. The school boasts a roster of outstanding professional alumni including Claire Danes, Alicia Keyes and Britney Spears.

Kelly notes that despite Broadway dreams, most students are college-bound. Others continue in conservatory programs. “Students are realistic and not crazy with pipe dreams,” she said. “They don’t need speeches about back-up plans. They find other things to be interested in along the way.”

Parente, one of the two arts teachers on staff, sees himself as “the bridge between academics and the arts.” He says teachers often grumble at faculty meetings about student absences due to professional obligations, and he has to remind them “why students chose this school.”

Performing arts teacher Kate Diaz’s dream has always been “to teach in a school like this.” She teaches dance to dance majors and movement to actors but says the Professional Performing Arts School also “provides the rigor of a collegiate preparatory school.”

During the AP English class, Andre Gulick, a senior who has appeared in 150 performances at the Metropolitan Opera House and was about to play the role of the father in the school’s premiere of Tony Kushner’s “Caroline, or Change” that evening, said his teachers “know so much and have been so helpful in balancing us.”

Gulick’s “wife“ in the school production, junior Elizabeth Kenney — who has appeared in outside theater productions, in film and in “Law and Order” on TV — said, “I feel so blessed artistically and academically. PPAS has shaped our perspective on the world no matter what career we choose.”

Backstage, Kenney was feeling “nervous and excited” because, “I really care about this play.” She described the Kushner musical as very challenging and not typical for high school productions. “No line is wasted,” she said.

Moments before curtain call, cast members scurry back and forth in the most basic of backstage quarters. Kenney checks the clothes rack to make sure her six costumes are hanging in order so she can make swift changes. There is plenty of camaraderie as students share bobby pins and hair spray and pull up back zippers.

“The arts are about collaboration,” said Kelly, the school counselor, “and students have that spirit here, both academically and professionally. They’re not divas but part of a team ensemble.”

When the curtain fell at the end of the performance, the standing ovation said it all.