Jonathan Fickies
Kenan Jaffe (left), a Latin teacher and the chapter leader, confers with a group of his 12th-graders as they analyze quotations from “The Aeneid.”
Image 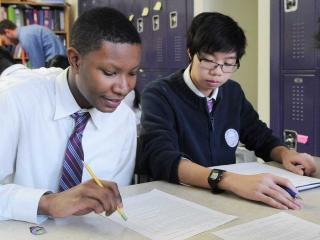 Jonathan Fickies
Students review a worksheet in Jaffe’s class.
The educators at Brooklyn Latin HS in the Bushwick-Williamsburg area cherished their school’s diverse student body. When they saw it slipping away, they determined to take action.

The school is a victim of its own success. Its growing reputation as a classical international baccalaureate school since its founding in 2006 has made it more difficult for neighborhood students to gain admission. Scores on the Specialized High School Admissions Test — the single requirement for admission to Brooklyn Latin and the city’s eight other specialized high schools — determine who gets in. Slowly but surely, the school’s enrollment changed from mostly local students to predominantly white and Asian students.

The changing student demographics concerned the staff in light of the growing research and recognition that all students benefit academically and socially from classroom diversity.

“We recognize the constraint we’re working under and the limited actions we can take,” English teacher Katherine Clark noted, “but we believe in the strength of a diverse student population and we’re passionate about trying to maintain it.”

The Progressive Redesign Opportunity Schools for Excellence (PROSE) program, created as part of the 2014 UFT-Department of Education contract, offered support to help address the challenge. When Brooklyn Latin joined PROSE in the 2015–16 school year, the staff learned about other PROSE schools that were exploring ways to use the program to sustain and increase student diversity. With the funds from a PROSE grant that the school applied for and won, Brooklyn Latin now will be able to implement a test-prep program in February that the staff hopes will promote a more varied student enrollment.

Students whose families have the means to help them prepare for the entrance exam have a competitive advantage over local students. To level the playing field, the Brooklyn Latin staff is initiating a test-prep program for 7th-graders from its diverse District 14 middle schools.

“Everyone on staff is enthusiastic about this and willing to take on the challenge,” said Chapter Leader Kenan Jaffe.

Those students might otherwise feel unprepared for the difficult test and therefore not consider the school within their reach. Jaffe explained that the PROSE grant will provide per-session compensation for teachers planning and staffing the test-prep program and for other expenses involved in the outreach efforts.

Physics teacher David Reynolds volunteered to research district middle schools as the project got under way this fall. Guidance counselors from those neighborhood schools have become allies in the search for appropriate candidates, and enrollment is now open for the six-week program that will begin on Feb. 11.

Teachers from Brooklyn Latin are fanning out across the neighborhood, reaching out to parents, making personal contacts with guidance counselors, attending high school fairs, making school visits and holding an open house. They are also enlisting their own students to get the message out to the community and to act as buddies to prospective recruits visiting the school.

Brooklyn Latin was represented on the UFT Specialized High School Task Force that recommended ways to address the paucity of minority students admitted to the city’s elite high schools in its March 2014 report.

“The UFT is committed to diversity in all of our schools,” said UFT Vice President for Academic High Schools Janella Hinds, who chaired the task force.

Christina Collins, a UFT lead researcher and policy analyst, said Brooklyn Latin is one of 30 schools in the PROSE and PROSE Pathways programs that are in varying stages of developing programs to jumpstart demographic change. At meetings arranged jointly by the UFT and the DOE, educators from these schools have come together to share their ideas, she said.

“One of the things I find promising,” Collins said, “is that while these teachers are also advocates for larger policy changes, they are simultaneously tailoring their projects to the specific needs of their schools.”

As a PROSE school, which it initially became to implement flexibility in scheduling, the Brooklyn Latin staff is used to working collaboratively and undertaking challenging initiatives.

“It’s great that our faculty is excited about this, but the first test will be if we have kids in seats on Feb. 11,” Jaffe said. “The next test will be if they have a good time with the program. And the final test will be if some of them choose to come to our school and do well enough on the Specialized High School Admissions Test to get in.”