Dual language: A practice whose time is overdue 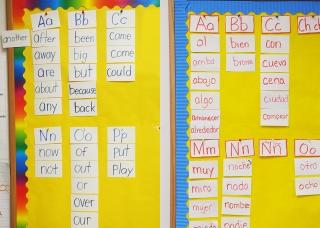 It’s Monday, so the 20 1st-graders in Sandra Vargas’ class at PS 178 in Washington Heights are receiving their instruction entirely in Spanish in a classroom where everything is written in that language.

“Escribe un numero que tenga cuatro decenas,” Vargas asks in her math lesson. Hands shoot up in the air. Many of the students know which number has four 10s. “Cuarenta,” says the child who is called on.

The next day, the same group of youngsters will spend the day next door in Elizabeth Albuquerque’s classroom, which is a near-mirror image of Vargas’ — except every sign, poster and book is in English. The children won’t repeat the previous day’s lesson, but will build on what they learned in the Spanish-only class.

It’s all part of the school’s successful dual language program. The payoff is huge, say the educators who work in the program. By 2nd or 3rd grade, “cognitive flexibility kicks in,” said Assistant Principal Diana Barros. Students who are building fluency in a second language are suddenly excelling in other classes, including math and science.

Chancellor Carmen Fariña said in March that the Department of Education is looking to increase the number of dual language programs throughout the city, which now number 132.

“We’ve waited too long as a city, and particularly as a country, to honor that speaking a second language is a plus, not a minus,” said Fariña, whose first language was Spanish. Fariña singled out the PS 178 program as a model that should be replicated in more New York City schools.

At PS 178 — which is K-3 but plans to expand through grade 5 — the student body is roughly three-quarters Spanish-dominant. Most of the students are from the Dominican Republic, with others from Puerto Rico, Colombia and Venezuela. In District 6 as a whole, 40 percent of students are English language learners and another 30 percent are former ELLs.

PS 178 has two models: a self-contained classroom with one bilingual teacher who teaches one day in Spanish and one day in English, and the side-by-side classrooms.

Barros said the school has been intent on maintaining the integrity of the program since its founding 13 years ago. “We’re always asking ourselves, ‘What do we do to sustain rigorous Spanish learning?’ It’s a challenge,” Barros said.

In their side-by side classrooms, Vargas and Albuquerque use song, rhythm and movement to reinforce new words. In Vargas’ class, that means singing out the months of the year or acting out words.

In a reading quiz in her English-language class, Albuquerque tells the students to hold their answer cards “close to your heart” before calling on them. “My students learn best with action,” she said. “And they have to agree on an answer. Collaboration, working in teams, helps them to acquire language skills.”

Both teachers say the side-by-side model requires intense collaboration. The pair aligns their lessons so that a story in English about family relationships will be echoed in a storybook in Spanish about “abuela.”

They are in constant consultation about the students — planning together before class begins, catching up at lunch, and checking in at the end of the day.

“I might say, ‘You need to assess so-and-so, or so-and-so struggled in math,’” said Albuquerque. “We get together at least three times a day. I’m her unofficial husband.”

Vargas agreed. “It’s like a marriage,” she said. “Communication is important. After we get home, we talk on the phone to find out if the day’s lesson went well.”

The two meet parents as a team as well, so they can discuss how the child is doing in both classes.

Vargas and Albuquerque credit their principal, Deirdre Budd, for emphasizing collaboration, not competition.

“There’s not one star in the building,” Albuquerque said. “It’s about lifting your partner up.”

Both Vargas and Albuquerque can see the transformation in their students.

Vargas gives the example of one 1st-grade student who needed help building his vocabulary in Spanish, his native language, before he could take on English. By 2nd grade, she said, he was writing fluently in English and Spanish and even improved in math and science as well. “The progress he made in a short amount of time was amazing,” Vargas said. “He blossomed.”

Albuquerque says that many of her Hispanic students are quiet and tentative at first, but start participating more in class as they begin to feel safe and more confident. “When they grasp a new concept, their whole demeanor changes,” she said.