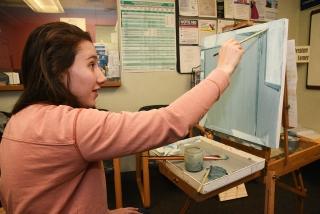 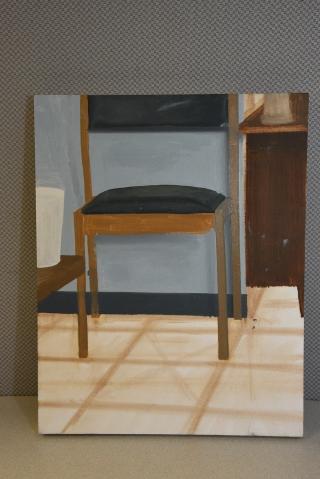 Visitors to the UFT’s Queens borough office in April were greeted by a curious sight: an artist with a tray full of oil paints standing before an easel in the fifth-floor waiting room.

The easel belonged to Clare Kambhu, an art teacher at Pan American HS in Elmhurst, who had taken up residence at the borough office as part of a graduate school art project.

A sign on the easel explained her mission to inquisitive visitors: “My paintings represent places related to education. I tend to focus on minute details of the environment to highlight the often unnoticed work that goes on.”

Kambhu, who took a study leave from the DOE to complete her Master of Fine Arts degree in painting at Yale University, has long been interested in creating artwork related to education.

“Given the real attacks that teachers are under, it seems important as a teacher in this moment to make art that’s related to teaching,” she said. “Art can feel insular and self-referential. I want to make art that’s not so separate from its educational foundations, for art to touch on things and have relevance outside itself.”

Kambhu frequently paints in school buildings, focusing on elements — such as the handles of a door or the legs of a chair — that are universally recognizable and familiar to anyone who’s spent time in a school.

“Where’s the room for human connection within these defined structures?” she said.

One of Kambhu’s graduate school classes focuses on the connection between artists and the labor movement, such as the Public Works of Art Project created to employ artists during the Great Depression.

As part of a class assignment to investigate a “site of labor” through artwork, Kambhu turned her attention from school buildings to the union office.

Painting with oil on wood panels, she spent five full days painting three different locations at the Queens borough office, including a close-up representation of a table of brochures in the waiting room.

“I don’t see it as a documentation but as an exploration, evoking a sense of the union through the architecture and a sense of presence without pointing to a specific activity,” she said. “I’m exploring how people are both framed and formed by institutions they’re a part of, how they find autonomy and meaningful human activity in institutional places.”