Darron, a 5th-grader in the stock market club at PS 314 in the South Bronx, said the holidays mean something different to him this year. While stuffing stockings may have been on the minds of some students, Darron is more interested in stocks.

This year, he said, he added Macy’s to his diversified portfolio because he thought the spike in holiday shopping would raise profits, a perception he developed participating in the club.

Darron is one of the students who learn about the stock exchange in a club created by paraprofessionals Judy Cruz and Lanaya Bellamy. The stock market club is one of a variety of clubs focused on math, engineering and technology that Cruz and Bellamy, as a team, have developed to help English language learners and students with disabilities at PS 314. 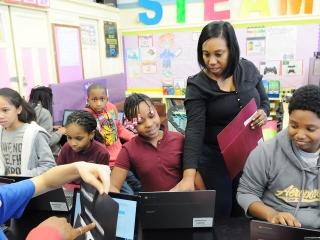 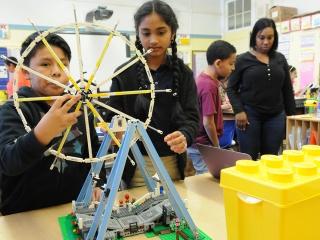 Students built this ferris wheel in the robotics club at PS 314 in the South Bronx.

stock market club members participate in the Stock Market Game, a simulation of trading sponsored by the SIFMA Foundation, an education association that fosters an understanding of financial markets. They compete with $100,000 in hypothetical money to buy and sell stocks, bonds and mutual funds.

The club helps the students hone their social skills and “allows them to think outside the box,” said Bellamy.

Thanks to more than $40,000 in donations from DonorsChoose, an educational charity that connects teachers in high-need schools with donors, the paras created their own science, technology, engineering, art and math (STEAM) room this year. The school also received a $5,000 grant for the clubs from the National Education Association.

“Our long-term goal is to expand this program so that we can go to other schools and implement it,” said Cruz.

Cruz and Bellamy have worked together for 12 years in Bronx schools, first at PS 50, where they collaborated to find ways to help students stay engaged in computer labs. At PS 314, they realized it was much harder to get students in regular classrooms to pay attention.

When the former early childhood school added grades 3 to 5, the paras put their minds together and pitched their idea to create clubs to their principal. The robotics and stock market clubs were formed in 2015. Since then, 37 students have signed up and there is a waitlist. The pair also introduced a video-gaming club and a coding club. The clubs, which are folded into the regular school day, are primarily for high-needs students, but — space permitting — are open to all students.

“What they’ve created in this room is high-expectation learning,” said Chapter Leader Dana Kirton, who supervises the clubs. “They do an awesome job and we’re proud as a school that they’ve taken this on.”

Bellamy said the stock market club members excel, and even compete with middle and high school students. They placed first and second in regional competition in 2015-16. This year, a few student teams rank among the top 10 in the region.

In the robotics club, students learn mechanics and problem solving in order to build towering structures like the Eiffel Tower and roller coasters using Legos and other engineering toys.

“These clubs are vital to students, but they’re equally important to our members,” said Hector Ruiz, the second vice chair of the Paraprofessionals Chapter. “It gives them the chance to really engage with students in a different way than the normal classroom routine.”

Cruz believes the possibilities are endless when paraprofessionals are willing to embrace new opportunities.

“If you have an idea, I think you should definitely try to implement it,” Cruz said.

While she was happy helping students one-on-one, she said, “I knew I could do so much more.”