Holding history in their hands

Science teacher Jeannie Herlihy observes as a student from her 8th-grade science class measures a fossil skull while another student records the data at a lab offered by the American Museum of Natural History. 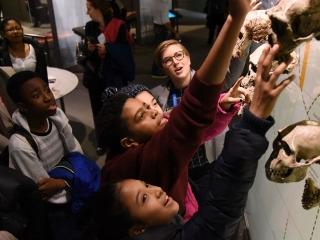 Miller Photography
Sackler Lab educator Kinley Russell shares our evolutionary fossil tree with students in the Spitzer Hall of Human Origins.
“The first time you walk in to Sackler Lab, it feels like you’ve been let into a secret room ... there are all these fossil skulls in the glass cabinets and on the tables, every primate you can imagine,” said Jeannie Herlihy, who teaches middle school science at Ballet Tech, the Manhattan public school for classical dance.

Students attending one of the labs at the Sackler Lab at the American Museum of Natural History get to handle these cast skulls, measure them with calipers and learn techniques to recognize and classify different ape and hominid species that are part of the evolutionary tree of humankind.

Before arriving at the lab on Jan. 4, Herlihy led her 8th-graders through the museum. Their excitement grew as they entered the Spitzer Hall of Human Origins. There, casts of skeletal fossils are included in dioramas that show realistic details such as the size of the footprints left behind in volcanic ash and the tools these hominids used, which bring to life the incredible story of human evolution.

Herlihy uses the museum’s labs for teaching the first unit — Reproduction, Heredity and Evolution — in her 8th-grade science course. “It complements the curriculum very well,” she said.

Inside the lab, students were seated four to a table, with a different fossil skull at each table. They worked as trained scientists, collecting evidence for species ranging from “Lucy” (Australopithecus afarensis) to Neanderthals, gorillas and humans.

After examining, measuring and labeling their skulls (which are color coded to show the parts that were excavated and those that were reconstructed), students moved to the next table, until they had worked on each skull, including a mystery skull that took some detective work to identify.

Sackler Lab educator Kinley Russell asked, “Who can tell me what evolution means?”

Miller Photography
Brow ridge or forehead? Students use the pencil test to determine that this fossil hominid has a brow ridge.
“To change and grow over time,” a student responded, to which Russell said: “I grew up from a child — did I evolve?” elucidating the salient point that evolution is change and development of a species, through natural selection, over time.

“Does anyone know what species is the closest living relative to humans?” Russell asked.

After a chorus of “chimpanzees!” she pushed them further: “What are some of the differences between humans and chimps?”

“The way we travel, on two feet or four hands and feet,” a student answered, which segued into a discussion of bipedalism vs. quadripedalism and how you can see that difference in fossil skeletons.

Before long, students were examining the fossil skulls, determining whether the species walked on two or four feet based on the position of the brain case; whether there was a forehead or a brow ridge; and the size of the canines and other teeth.

They completed an evolutionary tree of their findings, showing the ancestors of modern humans.

“We learned a lot about evolution in a hands-on way, not just looking and reading,” said student Sofia Villa.

“I liked it because it makes me wonder if there are any other species of hominids that are closely related to modern humans that we just haven’t discovered yet,” said Julius Santos. 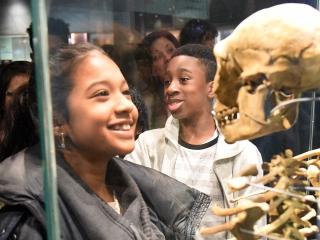 Miller Photography
An 8th-grader is surprised to discover that the 1.7 million-year-old East African fossil skeleton known as Turkana Boy, which is taller than she is, was only 8 years old.
After the lab, the students returned to the Hall of Origins, where Russell wowed them with fossils, including the 1.7 million-year-old East African skeleton of Turkana Boy, who was the height of today’s 15-year-old although he was only 8.

The enthusiasm was palpable among the students. “When is our next trip? This was so fun!” said David Simmons.

“I’m going to study way more about evolution,” said Ivan Germain. “And not just humans — animals and birds evolved, too.”

Back at school, the visit will inform the students’ final project on evolutionary change over time within a species.

“I like everything about the way this museum works with kids,” said Herlihy, “and students absolutely love this trip.”

The Sackler Lab has six different offerings for middle and high school students, including DNA Extraction from Strawberries; Forensic Anthropology; and Primate Evolution and Locomotion. Visit the Museum of Natural History for more information.