How Long Island City HS got its groove back 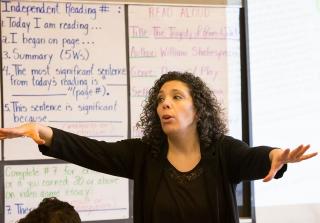 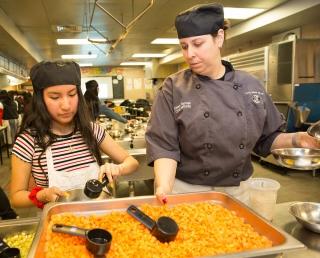 Seven years ago, Long Island City HS in Queens was a struggling school that was a mainstay on state watch lists and the target of a shake-up plan by Mayor Michael Bloomberg. Today, the school is in good standing with the state accountability standards for the first time ever. Student attendance is up, and graduation rates are rising.

The turnaround was the result of a set of strategies that included smaller class sizes and more individualized attention. But collaboration — between administrators and staff and among the teachers themselves — was the linchpin.

“It wasn’t top-down management,” said Laura Parker, a culinary arts teacher. “It allowed us to rise up.”

The Department of Education data attests to the school’s success. The school’s four-year graduation rate grew from 65 percent four years ago to 76 percent for the 2017–18 school year. The percentage of students who showed up for classes at least 90 percent of the time has climbed steadily from 50 percent to 62 percent over the same period.

Like many large, comprehensive high schools, Long Island City HS has a student population facing many socio-economic and academic challenges. Sixteen percent of the school’s 2,200 students have learning disabilities and 12 percent are English language learners. About 8 to 10 percent of the students live either doubled up with other families or in a shelter.

“We’re diverse, and we accept everyone here,” said Maria Karaiskos, an English teacher who has been at Long Island City HS for 25 years. Long Island City HS is the zoned school for Queensbridge Houses, the largest public housing development in the country.

The school’s future looked dim in 2012, when Bloomberg announced unilaterally his plan to “close” Long Island City HS and 23 other schools by excessing all the staff and forcing them to reapply for their jobs.

“It was a scary time,” Karaiskos said.

The UFT and the Council of School Supervisors and Administrators challenged the mayor’s move, arguing that he did not have the right to undertake a wholesale staff shake-up at the 24 schools. The arbitrator agreed that Bloomberg’s action violated the unions’ contracts with the DOE, a decision that was later upheld by a state judge.

That legal victory galvanized Long Island City HS and its newly appointed principal, Vivian Selenikas, to begin a rebuilding process. From the get-go, the school had advantages that would help it get back on track, including the staff’s strong commitment to the community and little staff turnover.

Many teachers like Karaiskos had attended the school when they were teenagers. “We’re not leaving,” she said. “It would be like leaving ourselves.”

The school set up a variety of community partnerships after becoming one of Mayor Bill de Blasio’s community schools. Four school learning communities were created to play to the school’s strengths and develop new ones: culinary arts, which the school has offered since it opened at its new site in 1995; hospitality, a logical partner for culinary arts; sports medicine; and global informatics, which offers Microsoft Office certification.

Small changes to the schedule also made a big impact.

“We made professional development sessions at the end of the school day, instead of the beginning,” said Chapter Leader Megan Howard.

Before the change, students would start school later on that one day to accommodate the PD sessions, but it proved disruptive, she said. “The students needed consistency.”

And educators realized they needed more common planning time. They now meet for 45 minutes a week to talk about their students and how they can work together to improve performance. “I meet with my students’ science, math and social studies teachers and discuss their needs across the curriculum,” Karaiskos said.

If a student is in crisis because of a problem at home, staff will share this information with each other. “It’s not just about student scores but their socio-emotional needs,” she said.

Students performing below grade level receive extra help. Karaiskos uses phonics and small group instruction in her two-hour English classes to build her students’ language skills. During the first hour, she has the help of a co-teacher, Papiya Debroy, who focuses on reading. The effort is paying off: The 24 9th-graders who started in September with 3rd- to 5th-grade reading levels were reading at 6th- to 8th-grade levels after 100 days of school, she said.

Even programs that have long been successful at Long Island City HS are getting an extra boost. The culinary program was a star attraction for students for years, even when the school was struggling. But the introduction of the small learning communities has given official recognition to the culinary arts program within the school community.

“The small learning communities are hands down the best thing in the school,” said Parker, the culinary arts teacher. “Teachers are familiar with students for four years, and the students have a sense of community.”