Every day, the students in A. A. Sieunarine's Studio Art 2 class at August Martin HS in Jamaica come prepared with five pieces of news to discuss. "I want them to know what's happening outside of Queens," Sieunarine said. "We don't live in a vacuum."

With that goal, Sieunarine designed a social justice art project inspired by Pablo Picasso's famous "Guernica" painting, which depicts the Nazi bombing of the Basque town during the Spanish Civil War. The students' paintings reflect Picasso's style and illustrate subjects including the conflict in Syria, climate change, 9/11 and school shootings.

The four-months-long project evolved from the course's "introduction of social and political concerns," said Sieunarine. Before students began painting, they spent two months preparing — from researching the history behind "Guernica" to studying Picasso's Cubism.

She said art teachers must integrate their activities with the state learning standards. "The students must read, write and talk, and then make art," she said. 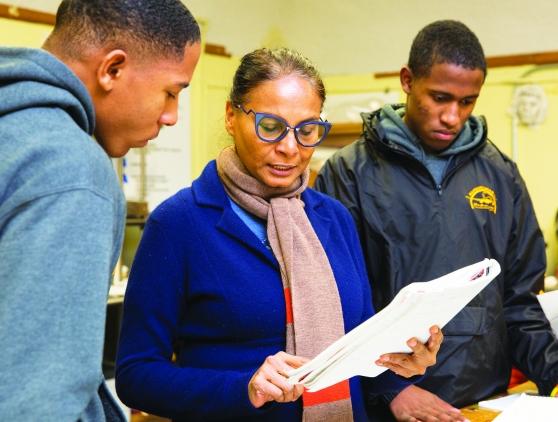 Art teacher A. A. Sieunarine works with students at August Martin HS in Queens.

Sieunarine "sets the bar extremely high" and "stretches students to think creatively," says music teacher Gladys Byrd. "She uses artists as a foundation and backdrop and then gives students those tools to take their inner vision and creativity and express them through art."

Sieunarine said her students "became very articulate by listening to the news." She wanted them to consider, "What is war doing to other children in the world?"

Tenth-grader Trudy-Ann said her painting portrayed Syrian children "who don't have a voice," featuring "blank eyes with no emotion." Her classmate Bryce said their class discussions influence their art. "A thought creates an image in your head and on the paper," he said.

English teacher Erika Maldonado, the UFT chapter leader, said, "We want our scholars to learn content, but we also want them to learn to be thinkers."

She said it's important to give children space to express themselves. When Aamir Griffin, a 14-year-old student from the same neighborhood, was killed by a stray bullet in October 2019 [see story on page 52], Sieunarine's project was "healing" for those affected by his death, she said.

Maldonado said Sieunarine gives them outlets they're comfortable with so they can "get these feelings out and come to terms with things. I think that's quite magical."