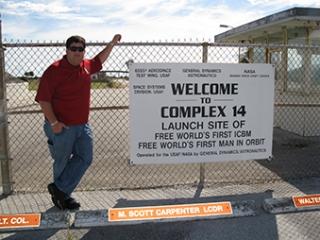 Working at the Cape Canaveral Air Force Station among rocket ships and spacecraft, Brian Bomser says he is “literally living my dream.” That dream blasted off for Brian as a 7th-grader at Louis Armstrong MS in East Elmhurst, when the opportunity to attend space camp with his classmates launched him toward a career in aerospace engineering. Now a quality engineer with InDyne, an Air Force contractor, Brian works to support the mission of the 45th Space Wing, which oversees all launches — from Atlas rockets to private spacecraft — from Cape Canaveral. Looking back, Brian is grateful that the public schools he attended allowed him to pursue his two passions: engineering and football.

I was a typical ’90s kid; I pretty much always had a computer growing up. This was in the early age of computers, and I remember using the computers in my after-school program to play games — like everyone’s favorite, Oregon Trail, with the old five-inch floppy disk. But my favorite was a program that was something about dissecting a frog. I’ve scoured Google trying to find something like it and I can’t.

There were a bunch of small kids my age in my neighborhood, and most of them went to PS 99 in Kew Gardens with me. One of the things I remember most fondly was the snowstorm of ’96 — it was the only time during my school career that schools were closed due to snow!

Middle school is really where I got my start in wanting to go into engineering. In my 7th- and 8th-grade years at Louis Armstrong MS, we drove up to Space Camp in Canada. You got the experience of being an astronaut, from the zero-G weightlessness simulator to the gyroscope where they spin you around. There was a student in my 8th-grade class who had cerebral palsy — he was in a wheelchair and communicated with a computer — and when he got into the zero-gravity chair … . Watching the look on his face, the smile on his face when he felt weightless, I’ll never forget it. It was absolutely amazing. I’ll remember that for the rest of my life.

Mr. Yaskulski (we called him Mr. Y) and Mr. Grambo were my favorite teachers in middle school. Mr. Y, who was in charge of the earth science program, was a Trekkie, and he would throw all sorts of “Star Trek” and “Star Wars” jokes into class. To leave the room, you had to use a hall pass. But the hall passes would disappear, so Mr. Y found a way to fix that problem. He’d make a hall pass a cardboard box, or at one point he used a two-pound weight. Mr. Grambo had all sorts of cool projects, like hatching baby chicks — we’d check in every day and see how the incubated eggs were doing. Once we made tomato sauce in class using the scientific method.

I knew I wanted to go to Brooklyn Tech for high school because I knew it could challenge me academically. In your junior and senior year, you choose a major where you take college-level or AP classes, and my major was mechanical and electrical engineering. I got to take classes like machine shop and robotics. I remember being in electrical engineering classes with Mr. McCollum, hooking up circuits to make a clock. To be able to do a major for two years in high school — that sealed the deal.

I played football for four years in high school. My coach, Jim DiBenedetto, wasn’t just the head coach of the football program, he was also the choral director. I would see him as he approached football with a strict demeanor, and then I would go to concerts and it was the same preparation and determination when it came to chorus.

What I loved about football was the physicality of it: the opportunity to exert my will onto somebody else against their will, the ability to literally push people around. But there’s also a mental aspect of the game — the preparation and game planning. There was a book called “The Physics of Football” that brought together science and football. There’s a thinking aspect and a thought process to both. It sounds absolutely crazy, but there is a connection with engineering.

— As told to reporter Rachel Nobel