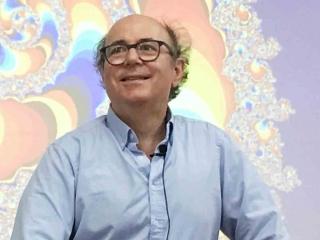 Frank Wilczek, one of the world’s most eminent theoretical physicists and a New York City public school graduate, can’t remember a time when he wasn’t interested in math and science. “My father was an engineer. He had enormous respect for science and really encouraged me,” says Wilczek, a professor at the Massachusetts Institute of Technology. “One of my first memories when I was very, very small — 1 or 2 years old — is taking apart and putting together a percolator,” he remembers. As a high school senior, Wilczek was a finalist in the national Science Talent Search. He says his premise about mathematical structures called groups was the best part of his project, posing “a sensible question for someone to ask at that stage.” What he does as a theoretical physicist “is recognizably the same sort of approach, just without the knowledge and sophistication that takes more training than I had at the time.” Wilczek’s desire to explore the inner workings of things eventually included atoms. Before the 20th century, only two fundamental forces were known, gravity and electromagnetism. “When people started studying the interior of atoms, they realized we needed two new forces, now called the weak and strong force,” Wilczek explains, “the strong force being the strongest force in nature. It’s responsible for nuclear physics and for making protons and neutrons in the first place.” While some facts were known, there was no coherent theory about the strong force. As a 21-year-old Princeton graduate student, Wilczek and David Gross formulated one, defining the properties of color gluons, which hold atomic nuclei together. For their work, they won the Nobel Prize in physics in 2004.

I have fond memories of school. At PS 186 in Glen Oaks, Queens, I skipped 3rd grade, where they learned cursive writing. I remember Mrs. Horowitz, my 4th grade teacher, being very patient, but also feeding me penmanship books.

By the time I got to JHS 172 in Floral Park in 1960, teachers gave me extra work, so I got ahead of the curriculum. We had IQ tests so they paid a lot of attention to me from early on. I was in the Special Progress program where you did three years — 7th, 8th and 9th grade — in two.

It was the time of the space race and the Cold War. The culture was permeated with how important science was to the country. I thought about the power of the scientists doing these amazing things — putting people into space and making big bombs — and I was impressed. Anyone who showed interest in science was encouraged, and I benefited from classes and clubs and projects.

We had a math team and the teacher, Mr. Ewan, was very interested in bridge. You could sense his passion. He brought in ideas about probability in the context of bridge. He was the first one who told me what to read outside of class to develop my math skills and my interests. There was a book I wanted to read about Einstein but the math was too advanced so I worked until I could read it.

I went to big schools, especially Martin Van Buren HS in Queens Village. My graduating class was 1,237 people. That was a blessing. There were many specialized programs and a group of us who took advanced classes. It was at a very high level. When I went to the University of Chicago, the classes were more advanced and the subjects were more sophisticated, but the students were just as good at Van Buren, if not better. It was a community, and we taught each other.

I arrived at Van Buren in 1964 for 10th grade. I had just turned 13. Mr. Gottlieb was my physics teacher very briefly, but he was really important to me. He saw something in me, or in my test scores, and gave me extra problems. Mid-semester he moved me into the higher-level physics class. It was like going into the deep end of the pool when you’re not ready but he told me not to worry and he gave me a push. It was a shock. I was going along smoothly, being encouraged but not challenged. He challenged me.

Mr. Rosenblatt taught the advanced class. He was a joker and the class loved him — he kept it fun. I had mixed feelings. I just wanted to wrestle with the stuff. But they worked well as a team: Mr. Gottlieb encouraging me and Mr. Rosenblatt making it fun.

I really owe Mr. Rosenblatt. He taught a class directed toward the Science Talent Search, and I was in it. I went to Washington, D.C., as one of 40 finalists and won 4th place. That was the highlight of my high school career and the experience gave me confidence that I could do things at that level. We met Nobel Prize winners and Vice President Hubert Humphrey attended the banquet. It was grand. It took me to a world I had no idea existed and made me feel I could be part of that.

In retrospect, Van Buren was an extraordinary place then, with students like inventor Ray Kurzweil, political activist Mario Savio and Nobel Prize winner Alvin Roth within a few years of one another. Everyone helped each other and set a level of ambition that was quite unusual. We were strivers: We wanted to improve ourselves and the world.

— as told to reporter Suzanne Popadin