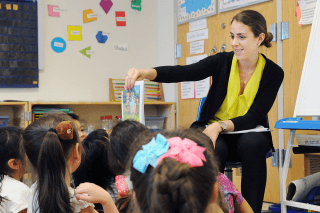 After seven years of catering to adults who often acted like children, Alison Fox fled the entertainment industry for the classroom, where she teaches actual children. “Real kindergartners are so much nicer and more rewarding to spend time with,” she says.

Fox recently concluded her first year teaching English as a new language at PS 13 in Elmhurst, Queens, one of the most diverse neighborhoods in the country. She doesn’t have her own classroom. Instead, she explains, “I do push-ins all day.” Fox goes into kindergarten classrooms and works with small groups of students who need extra help with reading and writing. “Many don’t speak English at all or very little, much less write it,” she says. “Obviously, the curriculum is way over their heads.”

After graduating from Syracuse University in 2008, the Long Island native tried mightily to make it in entertainment. Turned out, it was mostly gofer and no glory. Her title was often a variation of production assistant, and the paycheck was paltry. She worked for MTV, ABC, David Letterman, Paula Zahn and a talent agency. “At ‘Good Morning America’ they said, ‘You can have Thanksgiving or Christmas off,’’’ she recalls laughing. “I said, wait, I’m supposed to pick one?”

What no one could offer was rewarding work. So Fox decided to become a teacher. “I was never not happy around kids,” she says. In 2015, she entered into the New York City Teaching Fellows Program, planned her wedding and got married on Sept. 5. Four days later, she was in the classroom.

The learning curve has been steep. She remembers struggling to figure out how to help one 5-year-old boy who spoke only Chinese. “The reading, the writing, he got none of it,” she says. “But I knew he was smart. When we did a farm unit, he drew amazing pictures of every animal. What it took me almost the entire year to learn is to use the kids to translate for one another. It really helps them learn when they help each other learn.”

Another little girl would cling to her mother and not speak a word to Fox. Then, as Fox made her feel safe and accepted, the girl might whisper a hello in her teacher’s ear, then two words, and eventually an entire sentence.

“By the end of the year, she wasn’t whispering at all but speaking to me like the other children,” says Fox. “You learn a lot about the so-called silent period in books and in grad school, but it means nothing until you experience firsthand the transformation of a child and you get to hear the child’s voice and realize whatever part you played in helping it happen.”

For all the knowledge Fox has soaked up in her first year, she knows there is room for self-improvement: “I speak too fast and I’m impatient. But the kids are teaching me. I never knew I could talk slowly, and I am so much more patient now.”