In his class, learning equals fun and games 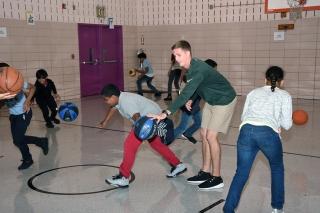 Kieran McArdle doesn’t skip a beat when asked to identify his favorite classes growing up. “Can gym be Nos. 1, 2 and 3?” laughs McArdle, a first-year K–5 physical education teacher at PS 48 in upper Manhattan.

A five-year veteran of Major League Lacrosse, McArdle is the embodiment of what the city’s Department of Education hopes to achieve with PE Works: The initiative aims to transform gym class into “an important academic subject that teaches students to be physically active, work as a team and set fitness goals that can last a lifetime” while putting at least one licensed, certified PE teacher in every elementary school.

“I really can’t see myself doing anything else but being involved with sports and physical activity,” says McArdle, who plays offense for the Florida Launch. “It’s the lifestyle I have always lived, and it’s pretty awesome to share it with the next generation.”

Growing up in Ronkonkoma on Long Island, McArdle played soccer, football, lacrosse and basketball. “As far back as I can remember, I have wanted to be a teacher,” he says. “I wrote in a journal in 3rd grade that I wanted to be a gym teacher, probably because my dad was. It’s humbling being able to both play lacrosse and teach.”

In Major League Lacrosse, and in the professional indoor league where McArdle plays in winter, “you don’t get a huge paycheck like the other big-time sports, so it’s a part-time job and I only travel on weekends,” he explains.

McArdle was recruited to play lacrosse at St. John’s University, where he was a three-time All American and a two-time Big East Offensive Player of the Year. He was drafted in his senior year at St. John’s and earned his master’s in education and his certification in physical education from Hofstra University while playing in the major leagues, where he was Rookie of the Year in 2014 and an All Star every year since.

“In the lacrosse world, I am pretty well-known. Outside of that, no,” he says. “I asked a few of my classes if they had even heard of lacrosse. About four or five students raised their hands.”

McArdle hopes to change that. “I think a lot of them will really enjoy the game when I introduce it to them. Hopefully, with my great coaching,” he jokes, “they’ll be able to pick it up.”

McArdle is an instructor at summer lacrosse camps and clinics. Seeing the improvement kids make playing lacrosse and seeing the impact he can make solidified McArdle’s desire to teach.

Working with kids also showed him that “you have to make it fun and entertaining and get them engaged for things to run smoothly. It’s really easy to lose” their attention.

While he hopes his love of lacrosse and all physical activity will be contagious, he says there are lessons to be learned, too.

Students “learn discipline, how to follow rules and directions, sportsmanship. They learn how to take in information and apply it, and they also have interaction with other kids,” McArdle says. Sports can teach “a lot of things you can use as life skills.”