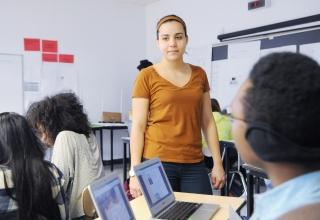 What’s a new teacher to do when an existing curriculum doesn’t tell the whole story?

Fayette Colon, an ambitious social studies teacher at Harvest Collegiate HS in Manhattan, had a solution: She created her own for classes with titles such as “Violence and Peace” and “Revolution and Rebellion in the Caribbean.”

“I knew I wanted to teach at a school where I wasn’t just reproducing a textbook curriculum,” Colon said. “When you create curriculum, you’re trying to find the right resources and the strategies that will make them engaging and accessible to your students. You’re a researcher and a teacher.”

As a Latino studies and history major at Columbia University, Colon began to realize that her own education as a Catholic-school student in the South Bronx had been lacking in certain areas.

“I’m Puerto Rican, and I wanted to learn more about where my family is from, but I had only learned about Puerto Rico through the U.S. viewpoint. So the education I received was very narrow,” she said.

As a tutor at Columbia’s Double Discovery Center, which serves low-income high school students, Colon became increasingly passionate about sharing her newfound knowledge with the Latino and Caribbean youth she tutored. Teaching social studies, she decided, would give her that opportunity.

As a student teacher at the James Baldwin School in Chelsea, Colon found herself paired with a cooperating teacher, Josh Heisler, who was compiling a curriculum of his own for a class on race in the United States.

“He allowed me to be part of that creation, and that became the rock on which I based the kind of teacher I wanted to be,” said Colon.

But in her first year of teaching after graduation, at a middle school in the South Bronx, Colon’s vision for her teaching career ran up against reality. Not only did Colon no longer have the support of the mentor who’d encouraged her at Baldwin, but she found herself the sole social studies teacher in her building.

“It was really scary and intimidating, because there was no expert I could turn to for advice,” she remembered.

One of her biggest challenges was finding interesting texts for her students that were accessible at their reading levels — especially because Colon was determined not to use a textbook.

“As a social studies teacher, you want to use primary sources,” she said. “I had to keep asking: How am I challenging students to think outside of themselves and what they know? What is foundational for these students and what are they going to remember 10 years from now?”

Hoping to teach at a school that offered more professional development opportunities, Colon transferred to Harvest Collegiate, a new high school in Union Square. Now in her second year there, Colon has been instrumental in shaping the school’s social studies curriculum.

“It takes a lot of research,” she said. “I find myself on the train reading a bunch of books.”

This semester, inspired by her students’ doodling during class, Colon invited a graffiti artist to co-teach a course on street art. At the end of the semester, students will create a mural on the school’s walls.

“I’m not an artist but there was a need for it,” said Colon. “As a teacher, your job isn’t always as simple as directly teaching; it’s about taking the time to be a facilitator to help students learn and grow.”