She sees herself in her students 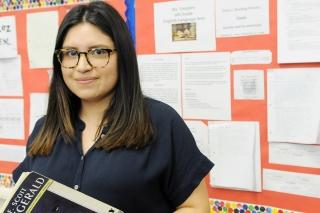 Fourteen years ago, when 10-year-old Maritza Vazquez walked into a 5th-grade classroom at PS 13 in Elmhurst, Queens, she could say “hello” and “how are you,” but nothing more.

She had been living with her grandparents in Ecuador, where she was born, and had just joined her parents in the United States. “Everything felt really new and overwhelming,” says Vazquez. “I hadn’t spent time with my parents in five years; I had a little brother I met when I moved here. I was feeling a lot of culture shock.”

Her 5th-grade class at PS 13, while diverse, had no other Spanish speakers; the ELA classes she teaches at the Academy for Language and Technology in the Bronx, where she is a first-year teacher, have only native Spanish speakers.

Vasquez sees a lot of herself in her 9th-grade immigrant students. She said she can relate “to everything they are feeling” because at one time she felt the same way. “I tell them I was a newcomer myself.”

Vazquez acknowledges that it’s easy for students to feel overwhelmed. Sometimes “it’s easier to give up rather than try because we’re scared to fail,” she tells them. “But at the end, it’s worth it.”

She remembers a school trip when she tried to talk to a classmate who didn’t speak Spanish. “I was trying to think of words I’d heard so I could put together a sentence,” she recalled. “Wanting to make friends really pushed me to learn more English.”

Vazquez decided to be a teacher at 14 when she tutored a 3rd-grader in math. “I really enjoyed the feeling of helping somebody else,” she said. “But I thought I wanted to be a math teacher.”

At Queens College, helping classmates write papers and analyze books allowed Vazquez to overcome some of her own insecurities. Though still self-conscious about her vocabulary (“every day I am learning new words”), she started thinking about teaching English. As a graduate student, Vazquez found her passion teaching an ELA class for newcomers.

Sharing her experiences, she believes, can help others. She said students ask her, “When did you feel comfortable speaking English because I still don’t feel that way?”

She tells them it’s a matter of practice and encourages them to read at home. And she assures them that it takes “some people longer than others, and that’s OK as long as you’re practicing.”

Vazquez also has learned the importance of building community in her classes and forging her own relationships with students. She has them write letters about themselves to get to know each other. It makes them comfortable enough, she said, “to participate even though they’re not sure of the answers.”

And she thinks back to her own experience when students who were unable to form a sentence in English at the beginning of the school year can finally communicate in their new language. “I felt really proud,” she says, “and I want them to be proud, too.”