Sing a song of student engagement 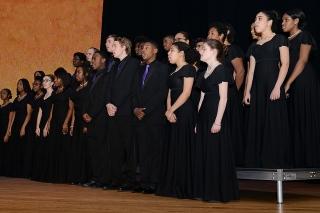 I am a first-year high school physics teacher with a lot to learn. I want to become a great teacher, so I’ve studied pedagogy deeply and deliberately. I attend lots of PDs. I strategize about classroom procedures. I actually read the books I get at teacher training sessions.

But my favorite way to study the art of teaching has been to watch other teachers in action. I sit in the back of their classes, taking meticulous notes and forming hypotheses about what drives student engagement.

One day, I went to watch my school’s chorus teacher. I hoped to learn some classroom management strategies from him, and I wanted to see how some of my less well-behaved students acted in his class. I have never been a music person, so the content of the class was unimportant to me.

As I entered the room, the students were warming up. I took out my clipboard to take notes. The chorus teacher had the students sing “ah” while they mimicked taking a bite of an apple to capture the proper open-mouth position. When they still weren’t projecting their voices, the chorus teacher asked his students to imagine eating a pomelo instead.

I found myself making the hand motion and saying “ah” with the rest of them. I was captivated. My clipboard and pen were abandoned on a nearby chair.

From that point forward, the class kept up a brisk tempo. The female and male sections alternated doing scales. The chorus teacher gave feedback while playing the bars for the next group, so that by the time his feedback was delivered, the next students were already singing. When a student sang off-key, he cold-called other students to share the correct note, and he guided the off-key student until she got there. I leaned forward in my seat, rooting for her to hit the correct note and quietly celebrating when she got there.

Next, the class went through an intricate and intellectually taxing exercise of scales that added one new note each time. Each note was one beat. They sang:

all the way to:

I tracked the notes in my head as the students sang, and I struggled to keep up. It was an exercise in speed and memory. The chorus teacher set up a friendly competition to see who could sing the phrase longer — and then the competition continued in a musical round.

When the bell rang, I told the chorus teacher my honest reaction, which was that it was the most fun I had ever had with music in my life.

The only notes I took from his class were the ones I sang.

I don’t have a precise, systematic plan to incorporate what I learned from this visitation into my own classroom. But I think that is OK. Sometimes, it’s good to just get swept away by watching an experienced teacher at work.

Maybe it’s time to start singing along with the car radio again.