Teaching immigrant students adds up for this math teacher 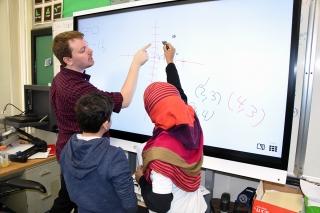 Soon after becoming a full-time teacher last fall, Michael Oeckel figured out why he couldn’t best the most obstreperous of his teenage students at the HS of World Cultures in the Bronx: “My face,” says Oeckel, a New York City Teaching Fellow. “It’s round and I smile constantly, so there’s no way I’m intimidating.”

Colleagues suggested he develop a teacher stare. “I practiced in the mirror,” he recalls, laughing. “It’s really scary. When I give the stare, you should feel like you caught on fire.”

Once his students saw that their disruptive or disrespectful behavior could turn their young teacher’s smile upside down, they buckled and behaved. These days, he meets them at the door, makes eye contact and shakes their hands. Once inside the classroom, he deploys physical tools to teach Algebra 1, Algebra 2 and geometry.

An intuitive pragmatist, Oeckel deploys teaching methods that are invaluable at this particular school, where most of the 450 students are newly arrived from scores of far-flung countries. They bring with them dozens of languages and dialects. “I’m completely at home with a class full of students who don’t speak English,” he says. “I’m in my element.”

A caffeine-loving, suburb-hating New Jersey native, Oeckel has traveled the world, run a foreign exchange program, taught English in Japan and holds a master’s degree in Asia Pacific Policy Studies from the University of British Columbia. He lives (temporarily) with his parents in Rockaway, New Jersey, and drives a punishing two hours to and from school daily. “I have a lot of time to come up with ways to explain mathematical concepts so the kids get them,” he quips.

Oeckel employs exaggerated hand motions and expressions (“I look ridiculous!”) and gets students out of their seats to illustrate, for example, the difference between the degrees of an angle and a radian. One student will stand in the middle of the room facing a window. The student will then turn until her back is to the window: a 180-degree turn. To demonstrate a radian (an arc around a central point), Oeckel invites a second student to stand in the middle of the room facing the first, then asks the second student to walk completely around the first student: Orbiting the student equals one pi radian.

Oeckel will stand on his head if it means helping a student succeed at learning math. “When they’re freshmen and can’t do it, they look really sad and quiet,” he says. “By the next year, they act out, they’re disruptive, they feel humiliated.”

Many of his students, he says, migrated through several countries before they reached the United States, an immigration path that disrupted their formal education. “They never learned, or they’ve forgotten how to learn,” he said. “My job is to teach them how to do school. When I see them look proud because they understand a concept, I feel great!”

About a dozen of Oeckel’s first-semester students recently burst into his classroom between classes. They surrounded him, exclaiming, “We miss you, we love you, you’re the best math teacher in the world!” Oeckel responded with his most potent and pure feature: his irrepressible smile.