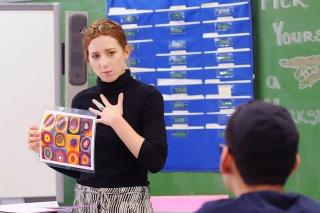 After a challenging childhood and a heart-wrenching 2017, Jarvis is living her dreams.

“I’m just so happy,” she says. “I get more joy being a teacher than I ever have doing anything in my entire life. And I always dreamed of living in New York.”

Jarvis was raised in Florida by her grandparents in a household that included her mom and sister, who both have special needs. Her grandfather died when she was 12, leaving her grandmother as guardian. She wanted Jarvis to be a lawyer or a doctor. Jarvis wanted to be an art teacher.

But college “didn’t really work” for Jarvis once she realized her youth — spent helping to care for her mother and sister — wasn’t normal. “I wanted to be a child for once,” she said. “I rebelled: I was super artsy, got a bunch of tattoos.” Jarvis dropped out of Florida State University to attend cosmetology school.

Color theory and design, basic to art education, are also integral parts of the hair industry.

Jarvis became a colorist and climbed the industry ladder. She worked Kanye West’s first fashion show and traveled the world doing hair. Along the way, she finished her bachelor’s degree at night.

When Jarvis decided to change careers, she was the perfect candidate for the city’s Teaching Fellows program, where “special education kind of chose me. Life came back full circle,” Jarvis says.

“As a hair stylist, it’s so easy to be ego-driven; it’s all about talking yourself up. When I go to work now, it’s all about what these kids need and want.”

Other people, Jarvis says, “sometimes get annoyed at the students and I can’t help but laugh, because none of their behaviors or attitudes are personal. It’s kids with disabilities trying to express themselves, kids being kids.”

Last summer, right before school began, Jarvis’ grandmother was diagnosed with a severe form of ALS. When she went into hospice, Jarvis rushed to her side. “It’s been a really hard first year for me,” she said. “The first month I missed 12 days.” But she was there when her grandmother died.

“She supported me through everything. She made sure I was in the job and happy and healthy and then she left. It wrecked my world,” Jarvis said. “I don’t have much family left. My friends are like family, and now I feel like the kids are my family.”

She sees the world through a different lens now. “A lot of people in the fashion industry, they think it’s the be-all and end-all,” she says. “These kids have given me a fresh perspective on what really matters in life.”