‘Advocacy for each patient’ is what counts

The importance of nurses as advocates for their patients and their profession was a prominent theme of the 37th annual Professional Issues Conference of the Federation of Nurses/UFT held on Nov. 18 and 19.

In her welcoming remarks to the 210 hospital and school nurses gathered at the Westin New York Grand Central Hotel, UFT Vice President for Non-DOE Members Anne Goldman, the head of the Federation of Nurses/UFT, criticized the intense focus of hospital administrators on cost-cutting instead of on achieving the best outcomes for patients.

“There is no understanding of the work we do,” she said. “The concern is your advocacy for each patient.”

Goldman told the nurses their membership in the UFT gives them the voice to fight for the best care for their patients. “As a union, if we do not have a collective voice, do you think any of you will have any impact?” she asked.

UFT President Michael Mulgrew, in his keynote address, spoke about the challenges ahead. He said the UFT always tries to work with lawmakers, but the union is going to prepare for a president and a Congress that is hostile to labor unions and working people in general, whatever the president’s rhetoric to the contrary. The “playbook,” he predicted, will be the “divide-and-conquer” tactics of union-busters everywhere.

“Without the work we do, the institutions crumble,” Mulgrew said to the nurses. “What I’m asking is for you to think about what an amazing opportunity this is for us to come up with new ways to organize.”

He continued, “Diversity is a strength of our union and our city.”

The two-day conference offered 10 different workshops on a variety of topics including emerging infectious diseases, new trends in diabetic treatment, emergency-care skills for nurses, and health issues and disparities in the LGBT community. 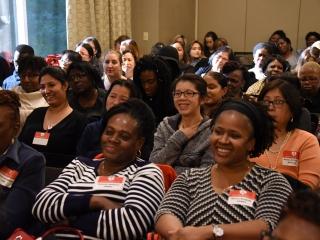 Members enjoy a light moment during a panel about the politics of health care at the Federation of Nurses/UFT’s annual conference at the Westin New York Grand Central hotel on Nov. 18–19.

At a panel discussion on the politics of health care issues, UFT Political Director Paul Egan told the nurses that the impending Republican assault on the Affordable Health Care Act will have a direct impact on their work. “We can expect some big changes, but precisely what will change we don’t know,” he said, noting that after his election, Trump said he intended to preserve some elements of Obamacare.

Egan and John Green, a legislative representative from New York State United Teachers, the UFT’s state affiliate, said the passage of the Safe Patient Handling Act earlier in 2016 was the culmination of years of work by the UFT and NYSUT. They said the two unions are bringing the same sustained focus to the long battle to pass state legislation mandating safe staffing ratios between nurses and patients.

Egan encouraged the nurses to participate in the nurse lobby day in Albany on May 9, 2017, and to give their first-person accounts of the importance of proper staffing levels.

Many of the nurses attending the Professional Issues Conference had come in years past. Nelsi Duluc, a nurse at NYU Lutheran Medical Center in Brooklyn, said she has attended for the past three years. “We get informed about what’s going on with the union,” she said.

Yvette Solomon, a nurse with Jewish Home Healthcare, said she returns each year because she likes the updates, the information and the networking opportunities the gathering offers.

“It’s good to come back and meet friends and have that kind of camaraderie,” Solomon said.