Miguel Cardona, a career educator and the Connecticut state education commissioner, is President-elect Joe Biden's nominee for U.S. education secretary. The nomination on Dec. 22 fulfills Biden's campaign promise to select an educator to lead the U.S. Department of Education. "Miguel Cardona is the right choice," said UFT President Michael Mulgrew. "It is vital that our public education policy is guided by someone whose life and career are centered in the classroom. We have seen what happens when education is led by someone who does not believe in the value of public schools."

If confirmed by the U.S. Senate, Cardona would succeed Betsy DeVos, who had no experience as an educator or a school administrator and never attended a public school.

Cardona is on the same page as Biden on a crucial issue: opening schools during the pandemic. He has fought to keep K-12 schools open in Connecticut, citing the academic losses students, especially Black and Latino children, face without in-person learning. Under his leadership, about a third of the state's 528,000 students are back in classrooms. Biden has said he wants the majority of schools to open in his first 100 days as president.

Cardona, 45, has served as Connecticut's education commissioner since August 2019. Prior to that, he spent 20 years as an educator and administrator in the city of Meriden, where he was born and raised. He began as an elementary school teacher and became one of the state's youngest principals at age 28. He was then promoted to assistant superintendent for teaching and learning in Meriden, a district of 9,000 students.

His selection also delivers on Biden's vow to appoint a diverse cabinet. In sharp contrast to billionaire DeVos, Cardona comes from humble origins. He grew up in public housing in Meriden. Born of parents of Puerto Rican heritage, Cardona spoke no English when he began school.

Cardona holds a doctorate from the University of Connecticut's Neag School of Education. His doctoral dissertation focused on the challenges of bilingual learners and the bureaucratic barriers to their education, including the lack of Spanish materials and the lack of access to extracurricular activities. He is an advocate of dual language programs, which promote learning in a child's first language as well as in English.

Cardona is also credited with playing a key role in negotiations to ensure more students in Hartford's struggling, segregated schools can enroll in diverse magnet schools. The agreement, announced in January 2020, was part of a settlement in a decades-long school desegregation case.

Educators and labor leaders greeted the news of Cardona's nomination with enthusiasm.

"Miguel Cardona is not just a proud product of public schools—he's made strengthening public education and fighting for equity his life's work," said Randi Weingarten, president of the American Federation of Teachers.

When Cardona's name first surfaced on Biden's short list for education secretary, a coalition including AFT Connecticut, the Connecticut Education Association and other unions representing a total of more than 60,000 public school employees in the state, released a statement supporting Cardona.

"He has been tested by the unprecedented upheaval caused by the pandemic," they wrote. "While this challenge has been a rocky road — and many issues remain unresolved — teachers and school support staff have appreciated his openness and collaboration. If selected as secretary of education, Dr. Cardona would be a positive force for public education — light years ahead of the dismal Betsy DeVos track record." 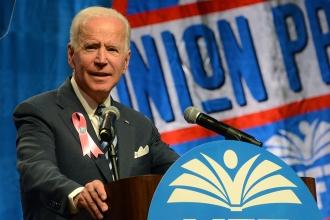 With President-elect Joe Biden and the soon-to-be first lady, teacher Jill Biden, in the White House, sweeping changes in U.S. education policy may be on the horizon.