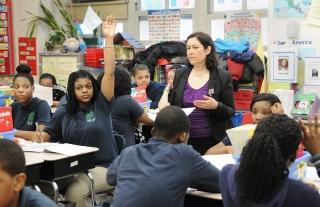 Michael Bloomberg may have left behind some shining new buildings, but a more somber part of his legacy still dwells in the city schools. Teachers’ answers to the UFT‘s comprehensive, random-sample survey of their work lives and professional views, conducted just before he left office, show just how low teacher morale has fallen and how grueling teachers’ working conditions have become.

“Teachers have been saying for a long time that working conditions in the schools have become intolerable and that it’s hurting their students,” UFT President Michael Mulgrew said. “This survey puts numbers to what we know and also makes clear the steps we can take to repair the damage. We are hopeful that the new administration will listen.”

Some 836 teachers, one third of the sample, returned completed surveys in December and several consented to follow-up interviews with the New York Teacher. Their responses to the 50-question survey are compiled on this page and the next two.

What the survey shows is that teachers are working many hours beyond their formal workday. They feel disrespected and demoralized. They spend hundreds of dollars of their own money on classroom supplies. They believe their students are being shortchanged. And they have clear ideas about how to improve the school system that were ignored during the Bloomberg years.

An exodus of talent

One sobering finding was the number of teachers — 70 percent — who confessed that they have recently seriously considered leaving the teaching profession. Experienced teachers who have mastered classroom skills were no less likely to have a foot out the door than new ones.

Not surprisingly, fewer than half, 46 percent, of the teachers said they expect to be teaching in their same school three years from now. The rest are planning to transfer, move to a different school system, pursue a nonteaching education job, leave education entirely or retire.

“This was so much a vocation, right from the beginning,” said Ian Hall at Brooklyn’s PS 169, a 10-year veteran who is now planning to retire. “There is a dreadful atmosphere. Everyone in the building is depressed.” He blamed “ill-trained,” inexperienced administrators who do not understand how children learn.

Asked what their days are like, teachers reported in the survey that they spend less time collaborating or planning than they do filling out administrative paperwork. Half said their school does not have the curriculum, the materials or the technology needed to teach to the Common Core standards, a situation that the UFT first raised alarms about in September which was never addressed.

Students take a backseat to checklists. “Everyone, administrators and teachers alike, are under so much pressure to comply with all the new initiatives that there is no time to just focus on teaching students,” one teacher wrote, expressing a sentiment the union has heard over and over again.

At the dawn of a new administration, teachers were clear that Bloomberg-era reforms focused on test-based accountability were not the way forward. Smaller classes, prekindergarten for all students and a changed atmosphere in the schools were what teachers hoped for the future. They would like to do what they know works, without the heavy pressure to comply with endless mandates.

“At the end of the day, we do what’s best for kids, regardless of the reforms and mandates they throw at us,” said Janine Wertheimer, a special education teacher at Midwood HS in Brooklyn.