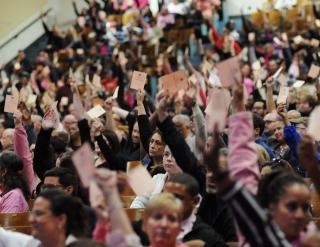 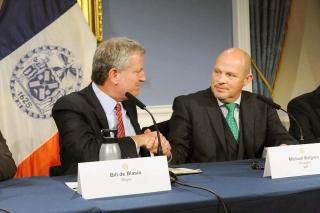 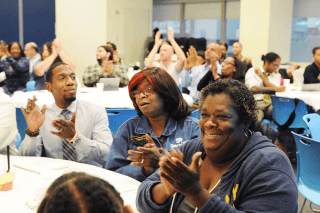 The overriding theme of the proposed DOE-UFT contract agreement is empowering educators to fight for the working conditions they need to do their jobs.

“This agreement recognizes your hard work and dedication and empowers us to improve the teaching and learning conditions in our schools so we can provide the best possible education to our students,” UFT President Michael Mulgrew said in an email to members.

The process began a year ago with the creation of a 400-member negotiating committee and ended in the wee hours on Oct. 11. Mulgrew said the contract, announced four months before the current contract expires, included “no givebacks” and was based on “members’ priorities” gleaned from their responses to online contract surveys sent to all divisions and functional chapters.

The agreement gives new authority to chapter leaders and their consultation committees to address workplace issues of professional development, basic instructional supplies, curriculum, inadequate space and workload. If the issue cannot be resolved at the school level, the chapter leader can escalate it. The contract also provides stronger protection for members from attempts by a supervisor to retaliate against or harass them when they voice concerns.

Read detailed information about the contract »

In a major victory for paras, the tentative contract provides due-process rights for paras that are similar to those of teachers. “It used to be you’re off payroll and we’ll get you a hearing when we get to it,” Mulgrew said. “Those days are over.”

Paras, the union’s lowest paid title, will also receive a new $500 longevity on top of the contractual raises if they have less than five years on the job. Paraprofessionals with five or more years will get a total of $1,200 added to their existing five- and 15-year longevities.

Acting on what teachers told the union in their contract survey responses, the UFT negotiated a reduction in the minimum number of principal observations of teachers [see sidebar]. Teams composed of UFT and DOE representatives in every school will conduct annual training sessions on the evaluation system early in the school year.

Teachers will now be able to earn their MA+30 differential by taking courses, called A+ courses, that are approved for this differential and are aligned to the actual work they do. In addition to college credits, College Level Examination Program credits and P-credits, the UFT and the DOE will preapprove a range of workshops and courses, including certain CTLE workshops, as A+ credits. Teachers who already have an MA+30 differential will be unaffected by the change. Teachers hired after Sept. 1, 2017 who want to achieve this differential will have to obtain a minimum of six A+ credits. Teachers hired after Sept. 1, 2019, will need a minimum of 18 A+ credits.

The proposed contract also establishes a Bronx Collaborative Schools Model to give extra support to up to 120 high-needs schools, mostly in the Bronx.

UFT members voted at home or school. Ballots had to be put in the mail by Oct. 31. The ballots were to be counted on Nov. 2.