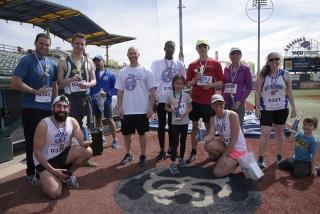 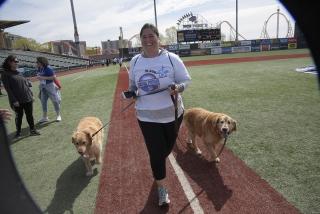 For the fifth year in a row, UFT members laced up their running sneakers and hit the Coney Island boardwalk for the UFT’s 5K Family Run/Walk on May 5, which raised $8,000 in donations to the UFT Disaster Relief Fund.

First-time participant Donald Salmon of P 12 in the Bronx was inspired by the memory of a fellow runner at his school, Francena Garcia, who passed away two years ago.

“It’s nice to be here because the summer’s coming up and we’re preparing for the summer by getting fit,” he said. “And contributing support for a cause was a major reason I signed up.”

The route took the nearly 200 participants — including UFT President Michael Mulgrew — past iconic sights on the Coney Island boardwalk and into MCU Park, home to the minor league Brooklyn Cyclones, where they crossed home plate at the finish line.

UFT Vice President for Middle Schools Richard Mantell, who organized the event, was there to greet them with medals and high fives.

“It’s a great way to build camaraderie while raising money for a great cause,” Mantell said.

Trophies were awarded to the top three finishers among men, women and students. One of them was 8-year-old Jordana Lo, the daughter of John Lo, a teacher at PS 94 in Queens, who was running alongside a group of 15 of his fellow PS 94 teachers and their family members. Lo said a team from his school has participated in every 5K Family Run/Walk since the first in 2013.

“We leave no one behind!” Lo shouted in encouragement to his team as the final members made their way across home plate.

The scores of runners and walkers included two honorary UFT members for the day: golden retrievers Charlie and Porzi, who seemed to be grinning as wide as their human companions as they crossed the finish line.

“It’s a fantastic event that we love, and we do it every year,” said Cliff Serrett, a teacher at IS 237 in Queens and the dogs’ owner.

“We want to support the union and share a positive moment with fellow teachers,” she said.