The only question UFT President Michael Mulgrew had about billionaire Betsy DeVos, President-elect Donald Trump’s choice for education secretary, was how to pronounce her last name: long or short “o” on the second syllable?

What was clear, he said at the start of the Dec. 14 Delegate Assembly, is what DeVos will mean for public education.

“Her entire life has been about attacking public education and workers’ rights,” Mulgrew told delegates assembled in Shanker Hall at union headquarters for their monthly meeting. 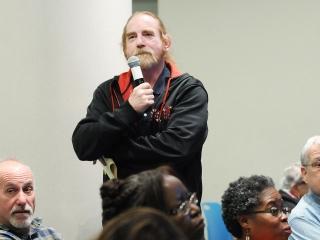 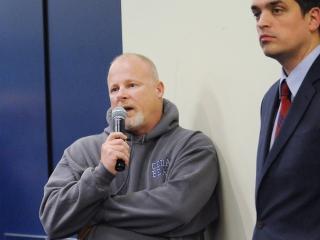 Laurence Fitzpatrick, the chapter leader at PS 255 in Queens, who taught for 10 years in the Amsterdam public school system in the Netherlands, asks a question about voucher programs.

His opinion of the rest of Trump’s cabinet nominees wasn’t much different. “Everyone they’ve put in charge hates the thing they are put in charge of,” he said.

Of labor secretary choice Andrew Puzder, he summed up: “No increase of the minimum wage, no National Labor Relations Board and no worker rights.” Of Scott Pruitt, tapped to head the Environmental Protection Agency, Mulgrew said: “He believes global warming is a hoax and that environmental protection gets in the way of business.”

Mulgrew flagged a few constraints on any doomsday scenarios. He noted that any plan to defund Title I, which targets federal funds at schools with large numbers of low-income children, would require dismantling the new federal education law, the Every Student Succeeds Act, which just passed in 2016. Also, he said, Republicans in the House of Representatives have shown disdain for the practice of tying federal funds to incentives to prod states to take particular policy actions. And any Friedrichs-like, anti-union lawsuit would probably take one to two years before it reached the U.S. Supreme Court, he said.

Another plus, he said, is that Gov. Andrew Cuomo recently has shown strong support for public education.

Mulgrew said his schedule has been filled with meetings with elected officials, labor groups and education activists about how to handle the dangers ahead.

“We have public education moving in the right direction in New York City,” he said.

“We need to show all of the good things going on in public schools and also show what’s wrong with privatizing.”

The delegates agreed to consider a resolution opposing the appointment of DeVos as secretary of education, although the automatic adjournment time came before it could come to a vote.

Mulgrew also warned delegates about the dangers of voting next November to hold a New York State constitutional convention. The delegates watched a slideshow that illustrated the reasons it’s such a threat. New Yorkers also will be voting for mayor in November. Mulgrew said the UFT Executive Board is putting together a task force to explore an endorsement in that race. Mayor Bill de Blasio already has the endorsement of several city unions, including the sanitation workers, Mulgrew noted.