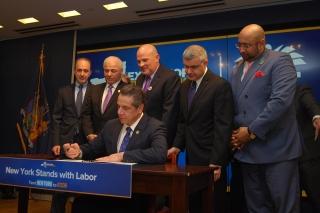 Gov. Cuomo, backed by labor leaders including UFT President Michael Mulgrew (center), signs legislation at UFT headquarters to reduce the number of services that New York's public sector unions are obligated to provide to workers who do not pay to support those services.

Gov. Cuomo, backed by labor leaders including UFT President Michael Mulgrew (center), signs legislation at UFT headquarters to reduce the number of services that New York's public sector unions are obligated to provide to workers who do not pay to support those services.

Before a packed house of labor leaders and union members at UFT headquarters, Gov. Andrew Cuomo signed legislation on April 12 that helps New York’s public-employee unions recruit and retain members and limits the free services these unions, including the UFT, must provide to workers who are not paying their share of the costs of those services.

The new protection comes as the U.S. Supreme Court weighs the Janus v. AFSCME case — a right-wing lawsuit aimed at starving public unions of funding by barring them from collecting fair-share fees from workers who benefit from a union’s collective bargaining but choose not to belong to the union. The court is expected to issue a ruling in the case in May or June.

“This is what we need to do in every state,” UFT President Michael Mulgrew told the 500-plus elected officials, labor leaders and union members assembled in Shanker Hall for the bill-signing ceremony.

The law, which was hammered out as part of this year’s state budget talks, limits the free services that New York’s public-sector unions must provide to workers who opt not to join the union. Outside of the negotiation and enforcement of the collective bargaining agreement, public sector unions will now be allowed to provide legal, economic and job-related services and benefits to members only. The unions, for instance, will not have to provide legal representation to these nonmembers in statutory or administrative proceedings.

The law also makes it easier for unions in New York to sign up public-sector workers by requiring a public employer to notify the union within 30 days after a worker is hired and to hand over their name, home address and work location. Under the law, public employers must begin dues deductions within 30 days of receiving authorization from employees.

Cuomo warned the Janus lawsuit was “the tip of the iceberg” in terms of the attack on working people and the labor movement by the “extreme conservative movement that is sweeping the country.”

“They are coming at the union movement piece by piece,” he said to the assembled union leaders and members, because of labor’s political clout and “because you built and protect the middle class.”

Signing the legislation to protect New York unions from the worst repercussions of the Janus case, the governor said, “is the first step of the resistance.”

Mario Cilento, the president of the state AFL-CIO that represents 2.5 million workers, noted that a unionized worker makes $11,000 a year more on average than a nonunion worker. He highlighted the power of New York State labor unions, which increased by 75,000 members in the last year.

Mulgrew called the Janus case “part of a coordinated plan by right-wing organizations to disenfranchise workers and crush the labor movement, one of the few strong advocates for working people.”