New York City public schools will receive a historic boost in state aid in the budget passed by the state Legislature in Albany on April 7.

The final budget provides $3 billion more for schools statewide, including a $1.3 billion increase for New York City schools. That unprecedented increase will address a funding inequity between high-need and suburban school districts across the state that has persisted for decades.

“This is the best budget the children of New York City have had in years,” said UFT President Michael Mulgrew.

Sixteen years after the New York State Court of Appeals found the state was violating its constitutional responsibility to provide a “sound, basic education” to every child, the $212 billion budget bill finally meets the terms of the Campaign for Fiscal Equity lawsuit by fully funding Foundation Aid — the part of state education aid that helps high-need districts the most.

Midyear spending cuts to the UFT Teacher Center will be reversed, with $14.26 million allocated to the program for the new fiscal year. The UFT Teacher Center, which offers professional learning to educators by educators at 115 school-based sites, played a pivotal role in helping them make a quick transition to remote learning in the spring of 2020.

To help pay for the additional funding for schools, state legislators increased taxes on large businesses and the wealthiest New Yorkers. The state’s millionaires will now pay a top income tax rate of 10.9% until 2027, a change that will generate an estimated $2.9 to $3.3 billion per year. The business income tax rate will also rise from 6.5% to 7.25% for three years for those reporting business incomes greater than $5 million.

COVID-19 relief from the Biden administration’s American Rescue Plan added $12.6 billion to the state budget. The UFT and its members had urged state lawmakers not to reduce the state’s own aid for schools and mask such a decrease with the new federal funding.

“Educators told Albany very clearly: Our students have suffered and we need real resources if we are to help our students recover,” said Mulgrew. “The allies of public education in the state Legislature came through for our kids.” 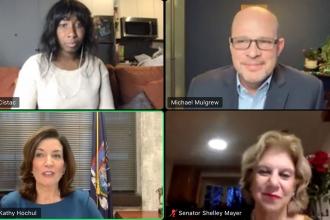 The UFT held a virtual legislative reception on March 11 to press Albany lawmakers for a large increase in education funding in the state budget to help city public schools address the needs of students recovering from the trauma of the pandemic. 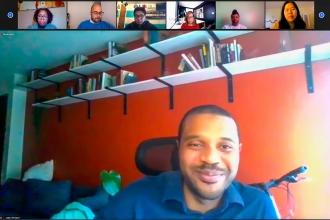 The coronavirus pandemic couldn’t stop 430 UFT members from virtually joining the union’s annual Lobby Day to advocate for funding for public schools and the union’s own education initiatives in the state budget.