District 75 schools, along with 3-K and pre-K sites, opened their doors for students on Sept. 21, a week before the rest of the school system. That early opening date caused anxiety for many members of District 75, which had received less attention over the summer from the city Department of Education than other community school districts before the UFT stepped in to compel the city to take action.

“Your advocacy brought the many safety and staffing issues in District 75 to Mayor Bill de Blasio’s attention,” UFT President Michael Mulgrew wrote to the district’s members on the day of the announcement of the phased-in reopening. “Now we have an unprecedented opportunity for your district to finally get the support and focus that it always should have received in our school system.

”In the days leading up to Sept. 21, District 75 chapter leaders scrambled to report every outstanding safety issue to the union. The UFT relayed those reports to the DOE for immediate response.

Personal protective equipment that had been stuck at many District 75 main sites in early September was finally dis-tributed to satellite sites. Central staff with special education licenses, among others, were redeployed to fill some of the staffing vacancies in the district.

“We stayed true to our core value in advocating for our students and staff by making sure everyone would be safe,” said UFT District 75 Representative David Doorga.

District 75 was tapped to go first because in-person learning is particularly important for its students, who rely on a constellation of specialized instruction-al and related services for their education. But the challenge of creating a safe work environment was greater since many special needs students cannot wear masks and District 75 staff cannot socially distance themselves while pro-viding many of the services and supports required by these students.

“If the membership does not feel safe, education goes out the window,” said Margaret Negrelli, the chapter lead-er at P370 in Coney Island, Brooklyn. Negrelli said she was happy to learn that the city was giving District 75 priority. “Now if something breaks, we’re not Oliver Twist saying ‘Sir, can I have some more?’” she said.

Sarina-Ann Raffa, the chapter leader at P811 in Little Neck, Queens, said the union moved quickly to address ventilation issues at her school’s eight sites. “They were checking vents and filling out the right documents,” she said. “They contacted the necessary people.

”Lauren Chiara, the chapter leader at P721 in Pelham Bay in the Bronx, said heating, ventilation and air conditioning issues were dealt with at the main site and problems with thermometers for temperature checks at her five sites were rectified with the right batteries.

District 75 chapter leaders said the first week back was full of the challenges.

“We’re trying to take deep breaths, get information out there and make sure everyone is safe,” said Negrelli.

Alexander Reich, the chapter leader at P373 on Staten Island, said there was little time to prepare for instruction, and programming wasn’t finalized at his school by Sept. 21. “There was a lot of craziness in a short time,” he said.

Nonetheless, Reich said, “Every teacher came ready to teach with open arms. We made sure kids and staff were safe.

”Chiara said members carried the day at her school, too. “Our best asset is our ability to work together as a team and communicate with one another,” she said. “We’re all in this together and if we don’t communicate, how do we get things done?”

“There were a lot of heated conversations between remote and in-person teachers when we just got back,” he said. “But when they started seeing the kids, all the tension drifted away.”

Bullaro said first-day jitters were as prevalent as always. “One of my students came in so nervous she was shaking,” Bullaro said. “I told her that it would be fine and I was nervous myself, and at the end of the day I asked her how her day went and she said it went great!”

On Staten Island, Ralph R. McKee Career and Technical Education HS Chapter Leader Frank Marelli said student schedules were confusing and stressful for his school’s teachers. He said it was important to keep the lines of communication open with school administrators “to deal with the frustration.” The principals are also frustrated, he noted. “They’re not getting a lot of information from DOE,” he said.

McKee welcomed just the senior class on Oct. 1, and Marelli estimated about 62 students showed up out of 80 who were scheduled. The school draws students who want hands-on learning in automotive repair and carpentry — something not possible in a remote setting, Marelli said.

At IS 24 on Staten Island, Chapter Leader Chris Rogers said the staff and students were mostly happy with the reopening. “Everyone put their best foot forward,” he said. “It’s great to have the kids back. It gives a sense of normalcy.

”Raymond Mena, the chapter leader at PS 86 in Kingsbridge Heights, the Bronx, said despite the anxiety level on the first day being “at an all-time high,” it felt great to be back with the students.

“I was very happy to see them, and they were happy, too,” Mena said. “They were ready and excited. They missed their friends, their teachers and the hustle and bustle of the school.”— Sarah Herman, Cara Metz and Linda Ocasio also contributed to this story 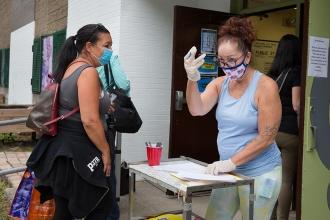 The DOE, in consultation with the UFT, has issued new protocols and procedures for staff for the 2020–21 school year. The following Q&A answers some of the most common questions about safety, instruction and student support.