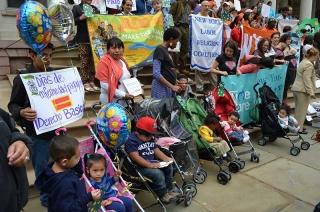 For more than 45 million U.S. workers, not reporting to work because you’re sick means losing income — and sometimes your job.

Celina Álvarez was working at a taquería in Queens when her heart began to throb. She went to the doctor on her one day off and was told she had a grave heart condition.

“I was hospitalized for four days and I lost my job just because I got sick and couldn’t go back to work right away,” Álvarez said.

When she returned to the taquería, she told the Daily News, “the manager told me there was no more work for me. The hospital stay saved my life, but cost me my job.”

Under groundbreaking legislation first passed last year and expanded to include more businesses this year, New York City has become the largest U.S. city to mandate that employers provide paid sick days. Like Álvarez, most of the beneficiaries work in low-wage, nonunion jobs in food service, retail or health care.

“This landmark law ensures that no worker will be fired for taking time off to care for themselves or a family member,” said Sherry Leiwant, who heads A Better Balance, which pushed for the new legislation. “By requiring that sick time be available for the care of sick children as well as for the worker’s own illness, the law will make our businesses, our schools and our communities healthier.”

The original law, passed in June 2013 over the veto of then-mayor Michael Bloomberg, required businesses with 15 or more employees to provide five paid sick days per year for workers to use if they, or their close relatives, fell ill. One million workers benefited. The new law, passed in March at Mayor Bill de Blasio’s behest, extends that requirement to the manufacturing sector and to businesses with as few as five employees. An estimated additional 240,000 workers will now be covered.

The legislation was the culmination of a four-year campaign by a coalition of union leaders, health care practitioners, parent groups and others who see paid sick leave as a basic worker and human right. Women, in particular, stand to benefit since they are the traditional caregivers when children get sick.

It’s a plus for public health, too, advocates say, since workers who can take sick days no longer have to go to work when ill, a particular problem for the food service industry. A 2012 report by researchers from the Centers for Disease Control and Prevention found that more than 3 million cases of food-borne illness are caused each year by sick restaurant workers. A second study in the same year found that workers who could take sick leave were more likely to have important cancer screening tests.

The expansion of the law in New York City will make all the difference for Mardo Melendez, who will now be covered. Melendez had to have emergency surgery last year and missed several days of work.

“I don’t have paid sick days so I didn’t earn any money on those days,” he said. “I support my daughter and my grandson so it was very hard on us financially.”