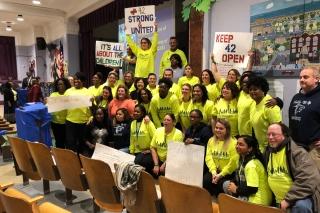 There is strength in organizing. One Queens community proved that on March 1, when the Panel for Educational Policy rejected the city’s plan to shut two Far Rockaway schools.

After hours of emotional testimony from more than 100 people, capping an intense months-long campaign, PS/MS 42 and MS 53, both in the city’s School Renewal Program, were given a reprieve and will remain open next year. “They weren’t expecting as much backlash as they got,” said Kelvin Dyer Jr., who has two daughters in PS/MS 42. “We made a lot of noise; we really hit the streets.”

John Krattinger, the school’s chapter leader, said “the key was getting parents, teachers and students all on the same page, organizing from a grassroots level, and then going to our politicians.” With support from the UFT, the coalition “moved mountains,” he said, proving what can happen when people work together.

“The panel’s vote gives these communities the opportunity to work with all stakeholders to ensure both of these schools are given the room, resources and attention needed for their success in achieving the highest possible outcomes,” said UFT President Michael Mulgrew.

Supporters of PS/MS 42 and MS 53 say they are on the right path and just need more time to keep the momentum going.

PS/MS 42 is making steady progress in test scores and quality reviews and leads the city’s K–8 renewal schools in math and ELA point growth and student achievement rating, according to city Department of Education data.

“What they were looking for in growth is definitely doable but not in the two years’ time allotted,” said Dyer. “That was frustrating. The stringent time frame was completely unrealistic and very punitive. ”

Lucia Moffa, the chapter leader at MS 53, said the facts speak for themselves and that’s what they presented to the Panel for Educational Policy. “We were told renewal was all about showing growth. In ELA, we have a ton of resources,” and the school did show growth, she said. “But in math,” Moffa said, “we only have one teacher now who’s a content-area certified math teacher. Last summer we finally got support. The DOE gave us coaches, and they help.”

Moffa, who teaches 8th-grade special education math and science, said it was unfair to compare MS 53’s proficiency levels to the citywide average when MS 53’s students arrive with many more challenges.

“We have some of the lowest-functioning kids in all categories, like students with disabilities, ELLs, kids who are coming from shelters,” Moffa said, For example, according to DOE data, 20 percent of the school’s students have disabilities and are taught in self-contained classrooms, compared to an average of 6 percent in middle schools citywide.

Diamond Singleton has two sons at PS/MS 42. The older one is in 6th grade. “He has special needs,” she said, praising the support and individualized help he has received at the school. “I know my son has struggled, but the dedicated teachers at PS 42 never gave up on him.”

Her 4th-grader has above-average grades but was shy until teachers worked with him on building confidence, Singleton said. One result? He was offered a place at Ballet Tech in Manhattan. “I was elated. But my son begged to return to PS 42,” she said. “I realized his drive for learning was motivated by the community there.”

The dedicated mom said her sons “love their school. And I will fight for them to be able to learn and grow in a place they feel comfortable and that stimulates them in ways no data sheet can show.”