Run in the sun 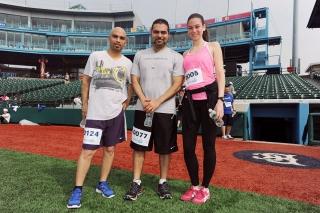 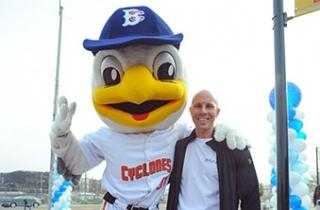 Sweat and smiles were the theme of the day at the UFT’s first 5K Family Run, which took place on May 10 in Coney Island.

The participants raised $13,000 for the UFT Disaster Relief Fund.

A damp, foggy morning gradually gave way to sunshine as 200 runners and walkers lined up behind a starting line adorned with blue and white balloons at MCU Park, home to the minor league Brooklyn Cyclones. They were joined by Cyclones mascot Sandy the Seagull, who genially posed for photographs.

“I’m celebrating my 57th birthday today with a run,” said Tony LaVecchio, a science teacher and the chapter leader at Bayside HS in Queens. LaVecchio, who is also a new member of the UFT Runners Committee, joked, “Let’s hope I finish!”

John Lo, a technology teacher at PS 94 in Sunset Park, was participating in his first 5K with his wife and daughter. Lo recruited nine of his fellow teachers to join him.

“I started training for a 5K to try to be more energetic, and I’ve had a lot of supportive friends at work,” he said. “This was a way to build morale and camaraderie among the staff.”

Participants made their way down the boardwalk along the beach and then back to the stadium, where they jubilantly crossed home plate to cheers from friends and colleagues. Gulping water and wiping the sweat from their eyes, they relaxed in the stands and basked in the sunshine.

The winner was Eric Lora, a teacher at PS 368 in Brooklyn, who broke the tape in just under 30 minutes.

The morning concluded with a raffle and an awards ceremony honoring the first three finishers, who each received a plaque. The youngest participant, a 9-year-old boy who ran with his father, was presented with a soccer ball.

“The course had nice scenery, a nice view,” said Monica Hinczewski, a teacher at IS 230 in Queens, who ran with a colleague. “And now, I feel accomplished!”