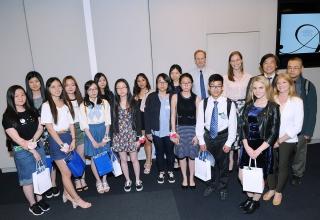 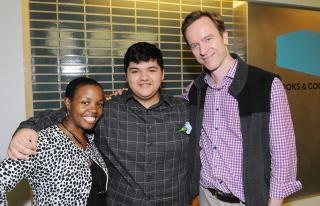 George Calderon, like a lot of high school freshmen, had the jitters four years ago when he first entered Harvest Collegiate HS in Manhattan.

“I was very nervous about meeting new people,” he recalled. “I had a really hard time in my middle school years. I thought high school would be the chance for me to make a change.”

Calderon, now a senior, was right. This year, he is one of 180 high school students who received a $5,000 Albert Shanker College Scholarship. Eight graduate students also received awards to continue their studies. Calderon joined the other Shanker scholars at a reception and ceremony in Shanker Hall at UFT headquarters in Manhattan on May 15.

The students were accompanied by proud parents, grandparents, siblings and other supporters — including their teachers and school counselors.

“Teachers know that when students are in our classes, they become our kids,” UFT President Michael Mulgrew said in his welcoming remarks.

Albert Shanker College Scholarship Fund Director Anthony Harmon shared with the audience a nugget of wisdom from author and pastor Charles Swindoll about the importance of having the right attitude in life. “Life is 10 percent what happens to me and 90 percent of how I react to it,” Swindoll wrote.

Each year, the scholarship fund awards $1 million to deserving students from low-income families. Since 1969, it has awarded more than $47 million in scholarships.

Calderon’s teacher and school counselor both attended the Shanker ceremony.

“George is amazingly positive, charismatic, motivated, a real leader,” said Colin McGrath, a music and theater teacher. “He came to Harvest and right from the beginning said he would succeed.”

Tara Williams, Harvest’s college counselor, agreed. “George takes an opportunity and he runs with it,” she said, noting the a cappella group he started at the school.

Calderon, who will attend Skidmore College with a double major in music and education, said McGrath, Williams and his homeroom adviser, Nikki Richards, “all helped me to gain more confidence.” He gives special credit to McGrath. “He helped me develop my music skills on guitar, and I pushed myself to perform,” he said.

John Dewey HS in Brooklyn had 14 Shanker scholarship winners this year. “We have an administration at the school that has created a very positive culture,” said Dewey Chapter Leader Michael Solo, who attended the event with Emily Smith, who teaches English as a new language, and Chung Chan, a social studies teacher.

Dewey student Jia Jia Chen, a Chinese immigrant, will attend the Rochester Institute of Technology to study computer science in the fall. She was grateful for the extra help she received to master English. “I was tutored in English after school by Dewey teachers,” she said.

Smith said many Dewey students who master the language go on to volunteer in the summer ENL program for new incoming English language learners. “The students are so motivated and always looking for ways to better themselves and prepare for more,” she said.

Scholarship winner Anisah Alladeen will go to Cornell University in Ithaca in the fall to study biology and society. A student at Jamaica Gateway to the Sciences HS, she was thinking of her AP English teacher, Anne Servillo, during the ceremony.

“Ms. Servillo helped me enhance my writing skills and I was able to submit a strong college essay,” Alladeen said. “She encouraged me to believe in my ability.”

The band from Brooklyn HS of the Arts performed under the direction of teacher John Scandone.