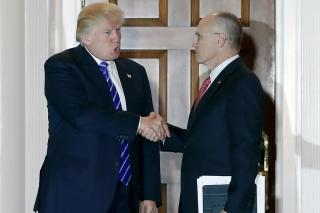 Puzder was the target of a fierce and sustained campaign by labor unions and progressive groups attacking his business record and lack of support for U.S. workers. He withdrew on Feb. 15 when support within the Republican Party crumbled in the wake of revelations of Puzder’s employment of an undocumented immigrant housekeeper — a significant issue for an administration that has declared undocumented immigrants a threat and targeted them for deportation — and allegations of domestic abuse by his ex-wife (which she since retracted).

“Andrew Puzder’s withdrawal from consideration for a Trump cabinet post is a victory for every hard-working American, from fast food workers and hotel maids to school teachers and nurses,” said Nelson Lichtenstein, a professor of history at the University of California, Santa Barbara and the director of the Center for the Study of Work, Labor and Democracy. “The labor movement spearheaded the fight to make sure that the chief occupant of the Frances Perkins Building in the nation’s capital has at least a modicum of sympathy for the humane values espoused by that great New Dealer.”

In his place, Trump nominated R. Alexander Acosta, the dean of Florida International University College of Law. Acosta served on the National Labor Relations Board from 2002 to 2003 under George W. Bush.

Since his Dec. 8 nomination, opponents had pummeled Puzder, the CEO of the company that runs the Hardee’s and Carl’s Jr.’s fast-food chains, on his record on worker rights. Puzder has been a strong opponent of significant raises to the minimum wage, paid sick leave, new rules for overtime, the Affordable Care Act and unions. He told Business Insider in March 2016 that he welcomed increased automation in the workplace because machines are “always polite, they always upsell, they never take a vacation, they never show up late, there’s never a slip-and-fall, or an age, sex or race discrimination case.”

Current and former employees of his restaurant chains were among the first and loudest to speak out against him. The U.S. Department of Labor found one or more wage and hour violations at nearly 60 percent of the Carl’s Jr. and Hardee’s restaurants it inspected, according to Bloomberg BNA. Thirty-three state and federal complaints were filed against Puzder’s parent company, CKE Restaurants, for labor violations including failure to pay overtime, managers erasing employees’ worked hours, employees ordered to work during mandated rest breaks, and employees ordered to clock out but stay on-site in case more customers arrive, CNN reported.

In 2015, CKE Restaurants stopped matching its employees’ contributions to their 401(k) plans, according to Fortune.

Puzder also faced withering criticism for his sexist TV ads featuring scantily clad women. “I like our ads,” he told Entrepreneur in 2015. “I like beautiful women eating burgers in bikinis. I think it’s very American.”